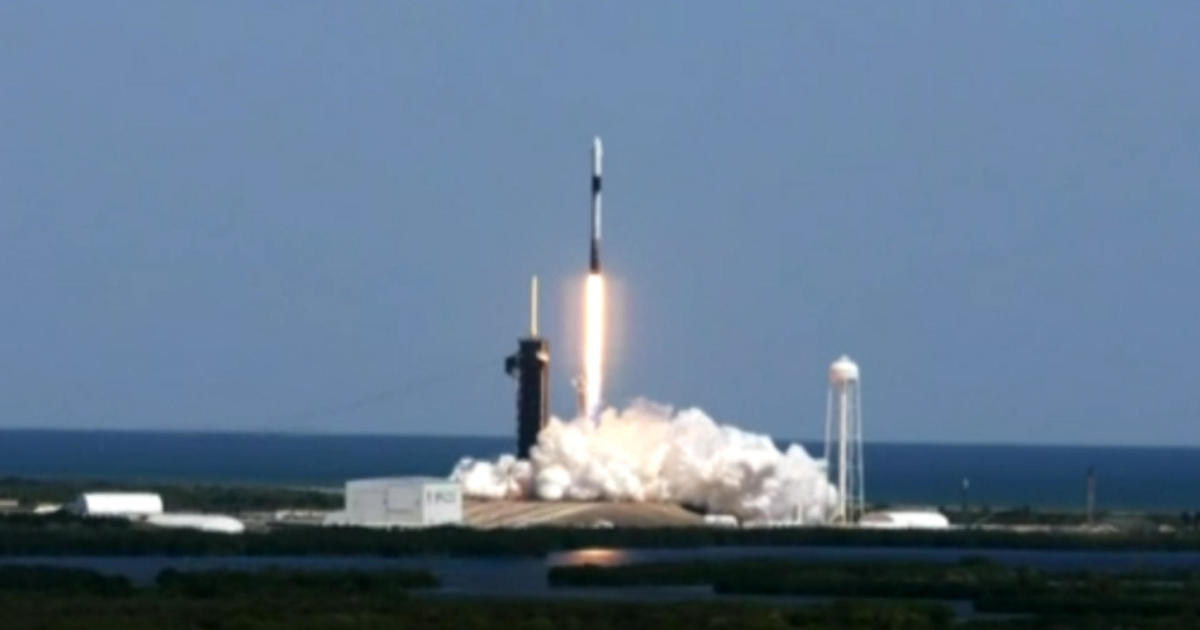 Using a previously flown first stage, the Falcon 9 thundered to life at 11:17 a.m. EDT and vaulted skyward from historic pad 39A at the Kennedy Space Center, climbing away to the northeast.

The automated climb to space appeared to go smoothly, with the rocket’s first stage powering the vehicle out of the dense lower atmosphere before falling away to head for landing on an off-shore droneship. It was the booster’s fourth flight, and its successful landing marked SpaceX’s 113th first stage recovery.

The second stage, meanwhile, completed the climb to orbit and the Crew Dragon was released to fly on its own 12 minutes after liftoff.

“This really looks like a government NASA mission from the outside. The difference is, it’s a private company and these are private customers. And this is a real turning point in human space flight,” López-Alegría told CBS News senior national correspondent Mark Strassmann.

If all goes well, López-Alegría and Connor, a veteran private pilot, will monitor an automated 20-hour rendezvous and approach to the space station before moving in for docking at the lab’s forward Harmony module around 7:45 a.m. Saturday.

The commercial crew will be welcomed aboard by the station’s seven-member professional crew, made up of three NASA astronauts and a German crewmate who were launched last November aboard another Crew Dragon, and three Russian cosmonauts who arrived at the station last month aboard a Soyuz ferry ship.

Eleven private astronauts, or “space tourists,” have visited the space station over the past two decades under commercial arrangements with the Russian space agency. But they all were escorted by professional cosmonauts and flew on government-sponsored missions.

The Axiom-1 — Ax-1 — crew is the first all-commercial non-government flight to the station and the first sanctioned by NASA.

The mission was financed by Axiom Space, a company with deep roots in the aerospace community that is working with NASA to build commercial space station modules that initially will be attached to the International Space Station.

When the ISS is retired at the end of the decade, the Axiom modules will be detached to fly on their own as an independent commercially operated space station. Ax-1 is the first in a series of stepping-stone flights leading up to that first commercial module launch in 2024. Additional flights and modules are planned after that.

López-Alegría, an Axiom vice president, is a veteran of four space flights who served as commander of the space station before retiring from NASA in 2012. He received refresher training for the Ax-1 flight and serves as a mentor to his “very successful” rookie crewmates.

Connor is a “non-profit activist investor” and founder of the Connor Group, a real estate investment firm managing $3.5 billion in assets. He is an acrobatic pilot, off-road racer and mountaineer. Pathy is chairman and CEO of a Montreal-based investment and finance company.

Stibbe flew F-16 jets in the Israeli air force, later serving in the reserves while building a successful business career. During active duty, he served under Ilan Ramon, who lost his life in the Columbia shuttle disaster after becoming the first Israeli in space. His mission is sponsored, in part, by the Ramon Foundation and the Israel Space Agency.

“I think it’s important to address the difference between space tourists and private astronauts,” Connor said before launch. “Our feeling is with space tourists, they’ll spend 10 or 15 hours training, five to 10 minutes in space. And by the way, that’s fine.

“In our case, we’ve spent anywhere from 750 to over a thousand hours training. We’re going to do some 25 different experiments encompassing over 100 hours of research. We understand this first civilian mission is a big honor and a big opportunity. But with that comes a big responsibility, and that is to execute the mission correctly and successfully.”

Said López-Alegría: “This really looks like a government mission from the outside. The difference is, it’s a private company and these are private customers. This is a real turning point in human spaceflight.”

The cost of the flight, covered by Axiom, has not been revealed, but NASA’s inspector general has estimated the price of a Falcon 9/Crew Dragon flight at around $55 million per passenger. Axiom covered the cost of López-Alegría’s seat while Connor, Pathy and Stibbe paid the company undisclosed amounts for their “tickets” to space.

Bill Harwood has been covering the U.S. space program full-time since 1984, first as Cape Canaveral bureau chief for United Press International and now as a consultant for CBS News. He covered 129 space shuttle missions, every interplanetary flight since Voyager 2’s flyby of Neptune and scores of commercial and military launches. Based at the Kennedy Space Center in Florida, Harwood is a devoted amateur astronomer and co-author of “Comm Check: The Final Flight of Shuttle Columbia.”