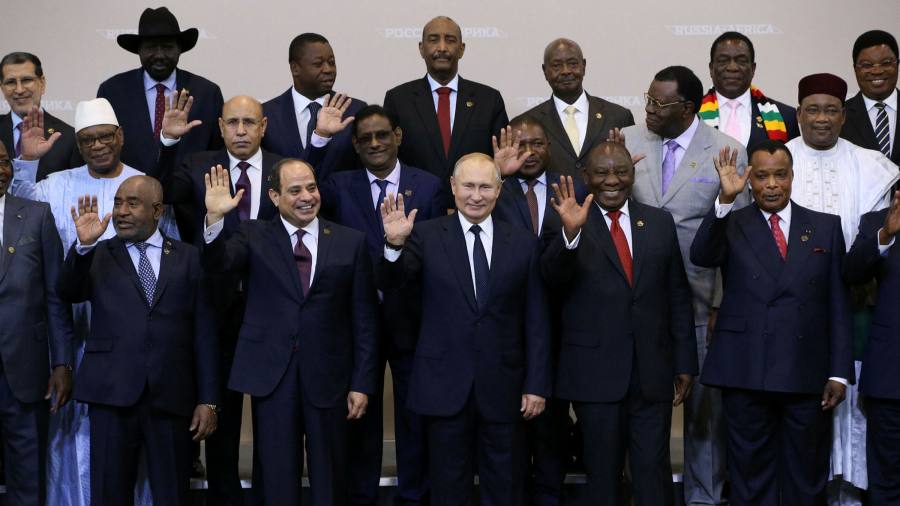 Many African governments have turned a blind eye to Vladimir Putin’s campaign to redraw Europe’s map in blood. True, 28 African nations voted at the UN to condemn the invasion. But of the 54 countries on the continent, 17 abstained and eight were too busy to vote.

The hesitancy to condemn Russia by some — including Senegal, the normally western-leaning nation whose president is currently chair of the African Union — owes much to the continent’s tradition of non-alignment.

But non-alignment and neutrality are not the same. If a psychopath is bayoneting a civilian to death, neutrality does not mean pressing the two sides to discuss their differences. To see the war in Ukraine as some abstract confrontation between Moscow and Nato is to deny Ukrainians any say in what sort of country they wish to build.

Many people in Africa are rightly concerned about the impact western sanctions on Russia could have on their fragile economies, in particular, on food supply. A war between two of the world’s biggest grain producers will push up the price of staples like bread, often a trigger for the sort of social unrest that swept the Arab world a decade ago or that helped topple the Sudanese dictator Omar al-Bashir in 2019.

But the abstention of many African countries — among them Angola, the Central African Republic, Mali, Mozambique, South Africa, Sudan and Zimbabwe — is also a sign of creeping Russian influence, mixed with a misplaced nostalgia for the Soviet Union.

In the past decade, Russia has stepped up its efforts to peddle influence, sell arms, extract minerals and generally make life difficult for the west in Africa. Moscow’s growing influence was on display in October 2019 when 43 African heads of state attended the first Russia-Africa summit in Sochi, a turnout that would not have embarrassed the triennial Forum on China-Africa Cooperation.

A timely report on Russia in Africa by the Tony Blair Institute For Global Change gives one explanation for Putin’s newfound interest as purely transactional: to rekindle old Soviet-era ties in order to extract resources (and UN votes) in return for security assistance.

Another, more sinister, hypothesis is that Putin considers Africa “a so-called second frontier”, for encircling western Europe “by fostering instability, disrupting elections, exporting arms and potentially fuelling migration” through the Sahel and Libya.

Africans will not welcome an analysis that sees the continent as a theatre for so-called “Great Power” rivalry. But that doesn’t mean it isn’t happening.

Are you personally affected by the War in Ukraine? We want to hear from you

Are you from Ukraine? Do you have friends and family in or from Ukraine whose lives have been upended? Or perhaps you’re doing something to help those individuals, such as fundraising or housing people in your own homes. We want to hear from you. Tell us via a short survey.

In Mali where Wagner, a Russian mercenary group and alleged Kremlin proxy, has 1,000 troops, Russia certainly shows every sign of pushing out European influence. Mali’s military government expelled the French ambassador in January. France and its European allies are now conducting their counter-terrorism operations in the Sahel from neighbouring Niger. Wagner may also have trained the Front for Change and Concord in Chad, which assassinated Chad’s leader and close French ally Idriss Déby, according to the Blair Institute report. It has fought rebels in the Central African Republic, another former French colony.

Across Africa, Russia has trained presidential guards and advised governments on the dark arts of keeping tabs on their people and on fixing elections. The country accounts for at least 40 per cent of all weapons imported by African governments.

In southern African states there is another reason for ambivalence about the war on Ukraine: a transfer of gratitude from the Soviet Union, which supported African liberation movements, to Putin’s Russia. Jacob Zuma, South Africa’s disgraced former president, called Putin a “man of peace”. Even Cyril Ramaphosa, the current president, was mystifyingly obsequious in his tweet: “Thanking His Excellency President Vladimir Putin for taking my call today so I could gain an understanding of the situation that was unfolding between Russia and Ukraine.”

Some will argue that a war in Europe is of little concern to Africans. Others will point to the west’s rapacious colonial history, its frequent hypocrisies and disastrous invasions of Iraq and Libya.

But this is no time for neutrality. Afrobarometer and other polling organisations show Africans overwhelmingly support the principles of democracy even when their leaders are reluctant to supply it. Africa’s most robust if imperfect democracies, such as Ghana, Kenya, Mauritius, Niger, Nigeria and Zambia, lined up to condemn Russia.

Moscow’s stealth offensive in Africa plausibly benefits some of the continent’s more autocratic leaders. It certainly will not help its citizens.

Video: China, Russia and the war in Ukraine

Letter in response to this article:

West should look at its own violation of the law / From Sanjay Ruparelia, Jarislowsky Democracy Chair, Ryerson University, Toronto, ON, Canada