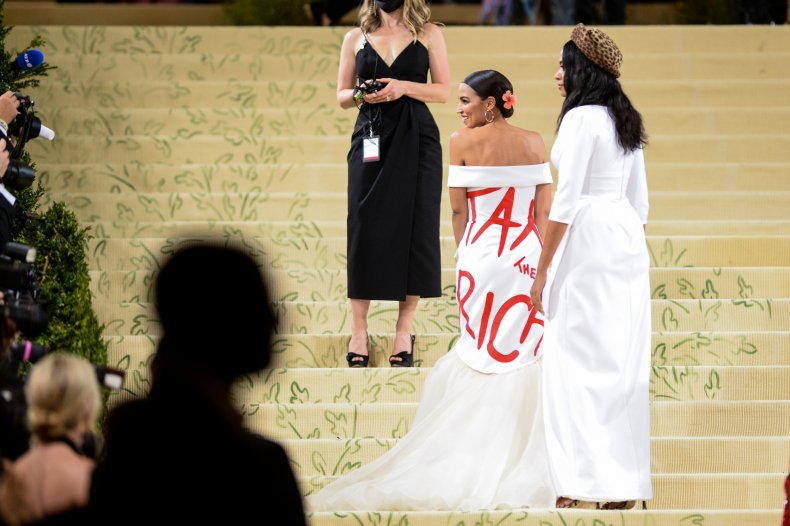 Online searches for “tax the rich” surged after Rep. Alexandria Ocasio-Cortez wore a custom gown splashed with the message at the Met Gala.

The New York congresswoman was among the famous faces at the pandemic-delayed event on Monday evening. She made a statement, wearing a floor-length white dress by Brother Vellies designer Aurora James with the words “tax the rich” splashed in red across the back.

According to Google Trends, searches for “tax the rich” peaked after Ocasio-Cortez’s appearance at the star-studded gala.

Ocasio-Cortez shared a screenshot showing the spike in an Instagram story, adding: “Surge in people looking up and discussing our f—ed up tax is & how we fix it so we can fund childcare, healthcare, climate action and student loan forgiveness for all. @aurorajames understood the assignment.”

Her dress had received mixed reviews, with some criticizing the progressive lawmaker for attending the exclusive event where tickets reportedly cost $30,000. However, most celebrities who are invited don’t pay to attend.

Alongside a photo of herself in the dress with the designer, she added: “Proud to work with @aurorajames as a sustainability focused, Black woman immigrant designer who went from starting her dream @brothervellies at a flea market in Brooklyn to winning the @cfda [the Council of Fashion Designers of America] against all odds – and then work together to kick open the doors at the Met.

“The time is now for childcare, healthcare, and climate action for all. Tax the rich.”

She added: “And yes, BEFORE anybody starts wilding out – NYC elected officials are routinely invited to and attend the Met due to our responsibilities in overseeing our city’s cultural institutions that serve the public. I was one of several in attendance.”

While some claimed Ocasio-Cortez’s presence was hypocritical, others praised her for making the issue of class disparity a major talking point at an event filled with wealthy celebrities.

“Everyone is talking about ‘Tax The Rich’ because of AOC’s stunt at a gala full of the people she was targeting, where she was invited for free in a free dress… to back up her actual legitimate work on this issue in Congress, and you’re all angry/confused as to why she did it?” Jameela Jamil tweeted.

Ocasio-Cortez shared the tweet, adding: “Couldn’t agree more. Taxing the rich will help us expand Medicare, extend childcare, take action on climate, and so much more.

“We have a precious opportunity right now in reconciliation with the Build Back Better Act, and we should use it.”