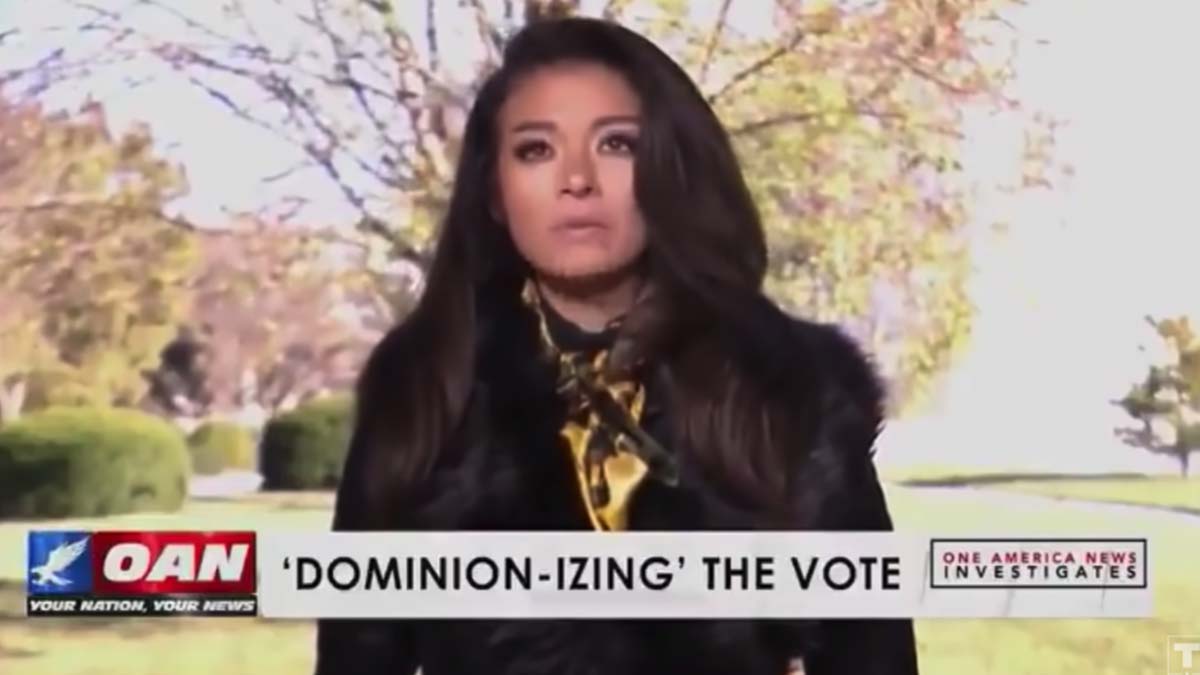 One America News lost a key ruling Friday in its battle to stave off libel suits, including a $1.6 billion case brought by Dominion Voting Systems.

The far-right network based in San Diego wanted a state court in Colorado to dismiss a similar suit by Eric Coomer, a former Dominion executive who alleges that Donald Trump allies, plus OAN and OAN reporter Chanel Rion, falsely claimed that Coomer tried to rig the 2020 election for Joe Biden.

But Colorado District Judge Marie Avery Moses ruled Friday against that motion, saying First Amendment and other defenses don’t hold up, and the Coomer case will go to trial.

“There is no constitutional value in false statements of fact or the deliberate spread of dangerous and inflammatory political disinformation designed to sow distrust in democratic institutions,” Moses wrote in a 136-page ruling. “The public has an active interest in ensuring that there are remedies for defamatory statements.”

As with other defendants, such as Trump backers Rudy Giuliani and Sidney Powell, she said, proof exists that OAN and Rion, “without evidence and in the face of compelling evidence to the contrary, falsely accused Coomer of overturning the presidential election.”

These allegations suggested criminal as well as professional misconduct, said the Denver judge.

“Further, there is evidence OAN-Rion’s allegations incited threats of real violence against Coomer,” the ruling added. “This is sufficient to establish a prima facie showing that OAN-Rion’s defamatory statements were extreme and outrageous.”

In a statement, Coomer lawyer Charlie Cain said: “The court issued a comprehensive and well-reasoned opinion which adds another volume to the judiciary’s wholesale rejection of baseless election fraud claims. There is a long road ahead, but this is a significant ruling for him and for the broader fight to safeguard our democracy.”

OAN and its legal team didn’t immediately respond to a request for comment.

But in November, after Dominion sued for libel, OAN founder and CEO Robert Herring Sr. said: “I figure when we put out the news, our news is always good. So we don’t have to worry about it. Meet ’em in court.”

It appears more likely that court will be in Washington — not Colorado as the Herrings have requested. (Dominion is based in Denver.)

She noted that Nichols, at an April 22 hearing, said he wanted to be notified immediately if the Colorado state court ruled on Rion and OAN’s motion to dismiss.

“The Colorado court ruled on that motion this afternoon,” Peaslee said Friday, “as well as on the Anti-SLAPP motions filed by Sidney Powell, Sidney Powell, P.C., Rudolph Giuliani, and Defending the Republic, Inc., and those filed by other defendants in that action.”

Peaslee concluded: “The fact that the Colorado action will continue against both the OAN defendants … in Dominion’s multiple actions currently pending before this Court further highlights the inefficiency of transfer.”

Nichols’ decision on the transfer of the case remains pending.

In the Colorado case, Coomer alleges that OAN and others pushed unfounded tales by far-right activist Joseph Oltmann, who claimed to have overheard a conversation in which Coomer told others Nov. 9, 2020: “Don’t worry about the election, Trump is not gonna win. I made f—-ing sure of that. Hahahaha.”

Coomer was then Dominion’s director of strategy and security.

The ruling has consequences for the Dominion case against OAN owner Herring Networks, especially if federal judge Nichols echoes the Moses ruling that “Coomer has established a reasonable likelihood that he will prevail on his claims for defamation against OAN-Rion.”