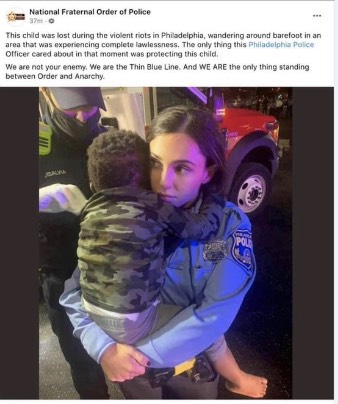 The city will pay $2 million to a mother who was beaten by police in front of her 2-year-old son while she was trying to pick up her nephew during unrest in West Philadelphia nearly a year ago.

“I hope that the officers responsible will never have the chance to do something like this to another person ever again,” Rickia Young said during a press conference on Tuesday.

On Oct. 27, 2020, Young and her 2-year-old son were in her car picking up her 16-year-old nephew in West Philadelphia. Young was trying to get the teen out of the area during the second day of protests over the deadly police shooting of Walter Wallace, Jr.

When Young was trying to get home early that morning, the National Guard had not yet arrived in Philadelphia to protect businesses during unrest. Police were in the area, monitoring protests and responding to looting, including along 52nd Street.

That’s where Young, who tried to take her usual route home from West Philly, was at the wheel when she encountered “a standoff between the officers at 52nd Street…and the different protesters and whoever else was out there in confrontation with the police,” attorney Kevin Mincey said.

Mincey said police on 52nd Street ordered Young to turn back. She began backing up to make a K-turn.

The officers then “swarmed her car,” Mincey said, using their batons to break the windows before opening the door and pulling Young from the vehicle. They struck Young and her nephew before detaining her and holding her son.

Young had swelling on her face and body, a swollen trachea and was bleeding.

Mincey said officers told Young her son was going to be taken “to a better place.” Young was placed in the back of a police vehicle with a juvenile who had a cell phone. Young used that person’s phone to call her mother, who is the 2-year-old’s grandmother, attorneys said.

The grandmother went to 52nd Street and asked for her daughter and grandson, but he wasn’t there. The grandmother eventually found the boy about four miles away near City Hall, in the back of a police vehicle with officers in the front seat. The 2-year-old was in his car seat, without his hearing aids and with broken glass shards in the seat.

Young spent the night between police headquarters and Jefferson University Hospital, where she received treatment under officer supervision. Later, she was released with no charges filed.

“We’re sorry,” Philadelphia Mayor Jim Kenney said. “We hope you can recover from the trauma you went through and it will never happen again.”

Young and her attorneys want the officers to be prosecuted.

“I can’t understand how those people would be allowed to continue to wear the uniform of the Philadelphia Police Department,” attorney Thomas Fitzpatrick said.

“While tensions were high during the unrest that followed the police-involved shooting of Walter Wallace, Jr., myself, along with the law enforcement community demand that officers exhibit the utmost professionalism, decorum, and poise while interacting with members of the public,” Police Commissioner Danielle Outlaw said.

NBC10 reached out to the Philadelphia District Attorney’s Office for comment. A spokesperson said they could not confirm or comment on any potential criminal investigation of the incident at this time.

“This administration has always taken its obligation to investigate and pursue justice for official misconduct seriously,” the spokesperson wrote. “Members of the public are urged to report information about official misconduct, including by police, directly to the District Attorney’s Special Investigations Unit: DAO_SIU@phila.gov or 215–686–9608.”

While the city of Philadelphia will pay $2 million to settle any claims, there’s a separate legal issue at hand. A lawsuit was also filed against the National Fraternal Order of Police for a viral Facebook post that later spread to other police social media pages.

The post, since removed, showed a female officer holding Young’s son, who was characterized as a child officers found abandoned and barefoot during “complete lawlessness” on the street. Young’s attorneys said that post mischaracterized the incident.

“This post was designed to stoke political anger, fear and resentment,” Mincey said. “All of this was done, one week before a contested national election in an effort to advance the political interests of the NFOP.”

National FOP spokesperson Jessica Cahill told NBC10 last year that “the National FOP subsequently learned of conflicting accounts of the circumstances under which the child came to be assisted by the officer and immediately took the photo and caption down.”

Social media rumors also cast Young and her nephew as looters or participants in the unrest that night. Attorneys said that wasn’t true.

“There was no looting on the part of Ms. Young or anyone that was in her vehicle. Not the 16-year-old, and certainly not the 2-year-old,” Fitzpatrick said.

Young called the lawsuit against the NFOP “extremely important.”

“For them to portray me as this type of mom who wouldn’t know or care where her child was while chaos was happening, all around is very hurtful,” she said.

NBC10 also reached out to the National FOP for comment on the settlement. We have not yet heard back from them.