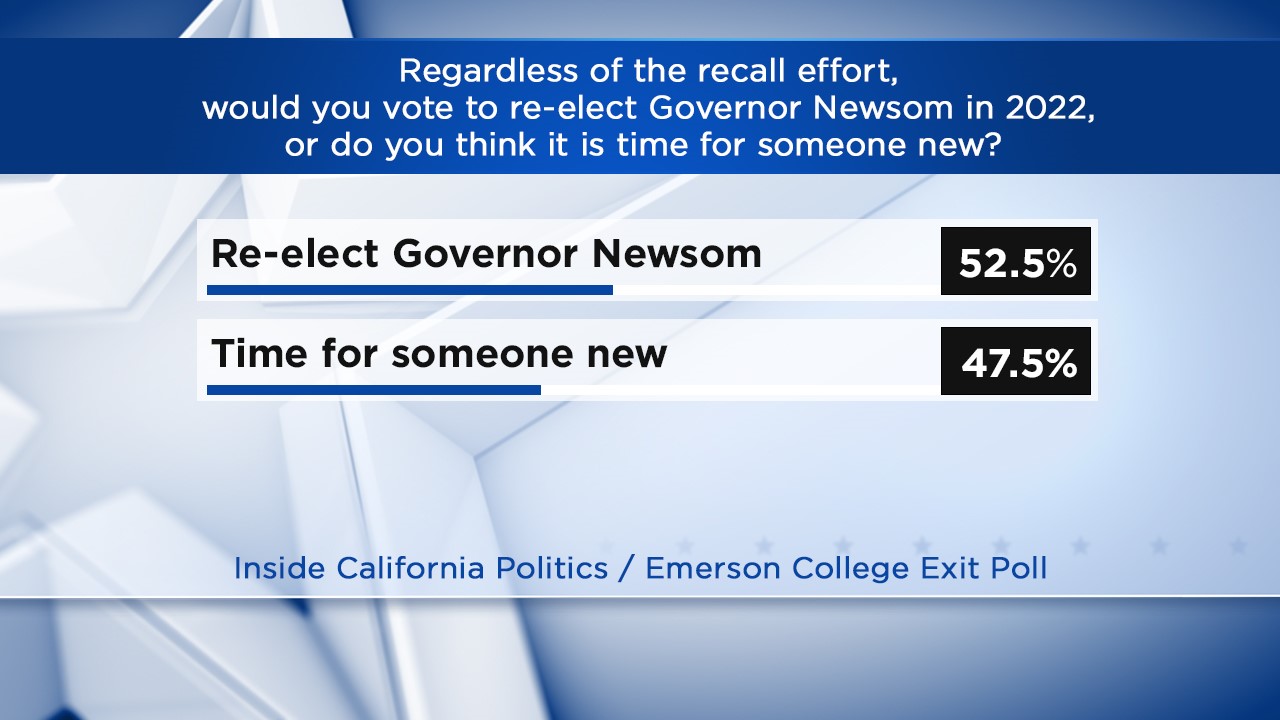 SACRAMENTO (INSIDE CALIFORNIA POLITICS): An exclusive Inside California Politics / Emerson College exit poll released Tuesday found more than half of California likely voters would vote to re-elect Gov. Gavin Newsom in 2022, regardless of the recall effort.

Gov. Newsom won the 2018 election by a landslide and has acknowledged that Californians have been anxious and weary after a difficult year during the pandemic. He has defended his efforts during the pandemic, saying his decisions have saved thousands of lives.

In two months, Larry Elder went from conservative talk radio host to leader of the Republican field in the California recall election, drawing national headlines, attracting enthusiastic fans to his rallies and quickly banking millions for his first campaign.

Elder, seeking to become the state’s first Black governor, has managed to outshine his GOP rivals in the polls by hewing to a conservative-libertarian message that does not appeal to many moderate or liberal voters. He has run as an outsider and given no sign he intends to shift his strategy in the contest’s closing days while alarming groups across the Democratic spectrum, including environmentalists, women’s rights advocates and fellow Blacks.

Gov. Newsom has aimed his attacks toward Republican candidate Larry Elder, saying he is more extreme in many ways than former President Donald Trump. Elder promises to bring a fresh eye and common sense to the Democratic-dominated state and has said that he will lift the mask and vaccine mandates immediately.

With Gov. Gavin Newsom’s fate at stake, Californians on Tuesday cast the last of the ballots that will decide whether he continues to lead them or if the nation’s most populous state veers in a more conservative direction amid anger over his actions during the COVID-19 pandemic.

Newsom, a Democrat who is leading in polls, is only the fourth governor in U.S. history and the second in California to face a recall. He was elected in a landslide less than three years ago.

“I’m feeling good, as long as we can get out that vote,” Newsom said after greeting volunteers in San Francisco hours before the polls closed.

A recall election has a less predictable dynamic than a regular election, he said.

“They designed this to catch us while we’re sleeping,” Newsom said. “But I think you’ve seen in the early voting Democrats have been coming out strong, and I’m just humbled by that.”

The Associated Press contributed to this report.