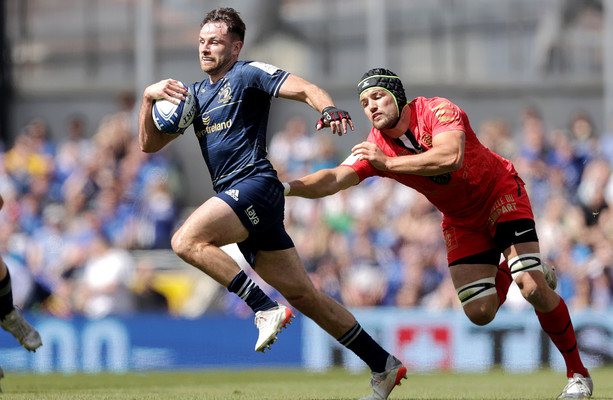 Toulouse building some pressure here after a strong scrum. That’s going to be an area of concern for Leinster now, particularly with Tadhg Furlong off the pitch.

What a try. Leinster are turning on the style now as Johnny Sexton carves Toulouse open with a wonderful shimmy. The Leinster captain then plays in Josh van der Flier and the flanker does well to finish under pressure. Sexton converts and Leinster lead by 13.

A real blow for Leinster as Tadhg Furlong limps off with less than 20 minutes played. Michael Ala’alatoa comes in to replace the Ireland international.

The try is good. James Lowe was the man to touch the ball down after some good work off the back of a lineout, with Johnny Sexton feeding Lowe with a lovely inside pass. The Leinster out-half slots the conversion and the home team are back in the driving seat.

Hang on, we’re going to have a TMO check for a forward pass.

Sexton kicks another close-range penalty to cut the deficit to one point. Leinster looking really dangerous with every attack, Hugo Keenan heavily involved.

Wow, what a response. Leinster break forward thanks to some great work by Tadhg Furlong and Hugo Keenan, but Jamison Gibson-Park loses possession in the Toulouse 22 and Antoine Dupont goes the length of the field to touch down under the posts. Thomas Ramos coverts and Toulouse have the lead.

Leinster have the first score of the day, Johnny Sexton clipping over a close-range penalty after Toulouse were pinged for offside. The province have made a really bright start to the game.

Leinster building some early pressure here as they look to make another fast start. We’ve also had our first scrum of the day, Leinster just about getting the ball away from a big Toulouse shove.

We’re just moments away from kick-off now, the teams are out on the pitch and the crowd are in fine voice.

Just 10 minutes to kick-off now, and it’s starting to fill up here.

And here’s the Toulouse team.

A reminder that Leinster are unchanged from the starting 15 that took to the field against Leicester Tigers last weekend. Here’s how they line up.

And here’s a piece with Leo Cullen from yesterday’s Captain’s Run, with the Leinster head coach discussing Dan Leavy’s new role within the group and the challenge his team face today. You can read it here.

“These type of games, you don’t get extra points for style. It’s about getting through to the next round and they’ve (Toulouse) done that incredibly effectively. If you think they’d a man sent off in that Ulster game, they dig it out really, don’t they? They stay in the hunt, score a late try, they go to Belfast, they’re still hanging in, hanging in but they get the job done.”

There’s plenty of good reading to keep you occupied before kick-off, starting with Garry Doyle’s match preview, which you can find here.

You sense Leinster need this more, not just because it is four years since their last win, more because of the manner of their defeats in Europe since, to Saracens in 2019 and 2020, to La Rochelle last year.

Hello and welcome to our live coverage of Leinster’s Heineken Champions Cup semi-final meeting with Toulouse, Ciarán Kennedy here at the Aviva Stadium on a beautiful sunny day in Dublin 4.

There’s a real big match feel around the place, with good numbers of Toulouse supporters around the stadium before the game too.

We’ll be bringing you all the action as it happens, let us know your predictions in the comments section.