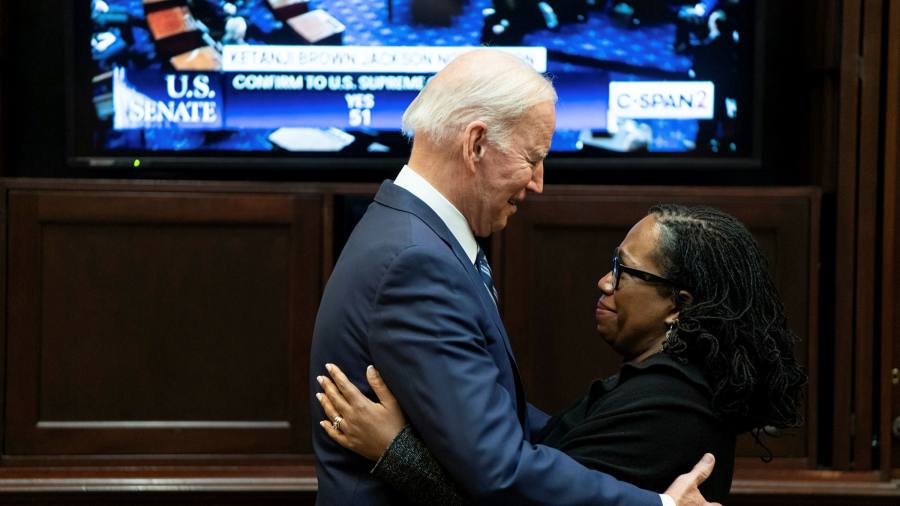 The US Senate has confirmed Ketanji Brown Jackson to a seat on the Supreme Court, making her the first black female justice to join America’s highest court in a big win for President Joe Biden, who championed her nomination.

The final vote in the upper chamber of Congress to seal Jackson’s confirmation occurred on Thursday afternoon, with 53 senators — including all 50 Democrats and three Republicans — backing her lifetime appointment to the court, and 47 voting against it.

Jackson, currently a judge on the powerful US Court of Appeals for the DC Circuit, will replace outgoing justice Stephen Breyer, who was nominated to the Supreme Court by former president Bill Clinton and will officially retire at the end of the court’s term this year.

Jackson’s confirmation to the nine-member body will not alter its ideological make-up. At the moment, the Supreme Court is tilted towards conservative justices, who hold six seats, compared with just three for liberals appointed by Clinton and Barack Obama.

But her ascent to the Supreme Court is historic, not just because she is the first black woman to reach the highest level of the US judiciary, but also because she will be the first justice who has served as a public defender.

“This milestone should have happened generations ago — generations ago — but we are always trotting on a path towards a more perfect union. Nevertheless, America today is taking a giant step towards making our union more perfect,” Chuck Schumer, the Senate majority leader, said on Thursday before the vote.

Jackson, who watched the vote on television at the White House with Biden, had been considered the frontrunner for the position since Biden took office after he made a campaign pledge to nominate the first black woman on the Supreme Court. Some Biden allies such as Jim Clyburn, the South Carolina Democrat, had pushed for alternative candidates, but the US president sided with Jackson as a highly qualified and easily confirmed nominee.

Biden formally announced Jackson’s nomination on February 25, the day after Russia invaded Ukraine, in a sign of the importance of the designation to his presidency and congressional Democrats. Mitch McConnell, the Republican Senate minority leader who led the charge to confirm Donald Trump’s three Supreme Court nominees, attacked Jackson as extreme, and was joined by most of his party in opposing her nomination.

“With Washington Democrats in power, the far left got the reckless inflationary spending they wanted. The far left has gotten the insecure border they wanted. And today, the far left will get the Supreme Court justice they wanted,” McConnell said. But Mitt Romney of Utah, Lisa Murkowski of Alaska and Susan Collins of Maine — three Republican senators — voted to support her.

“My support rests on Judge Jackson’s qualifications, which no one questions; her demonstrated judicial independence; her demeanour and temperament; and the important perspective she would bring to the court as a replacement for Justice Breyer,” Murkowski said this week. 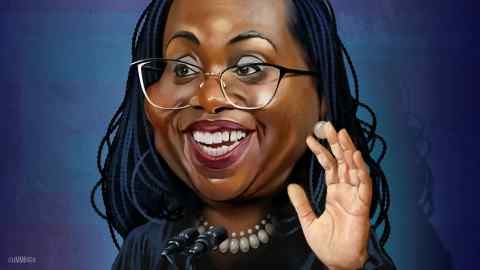 “It also rests on my rejection of the corrosive politicisation of the review process for Supreme Court nominees, which, on both sides of the aisle, is growing worse and more detached from reality by the year.”

The White House and Democrats will hope that Jackson’s ascent to the Supreme Court will boost enthusiasm within the party’s base ahead of the midterm elections, for which Republicans have the upper hand given Biden’s low approval ratings and voter unease about high inflation.

Progressive Democrats have also been disappointed that Biden and Congress were unable to agree legislation to protect voting rights and pass much of his economic agenda, including more funding for education, childcare and climate change, which was to be paid for with higher taxes on the wealthy and large companies.

Rana Foroohar and Edward Luce discuss the biggest themes at the intersection of money and power in US politics every Monday and Friday. Sign up for the newsletter here