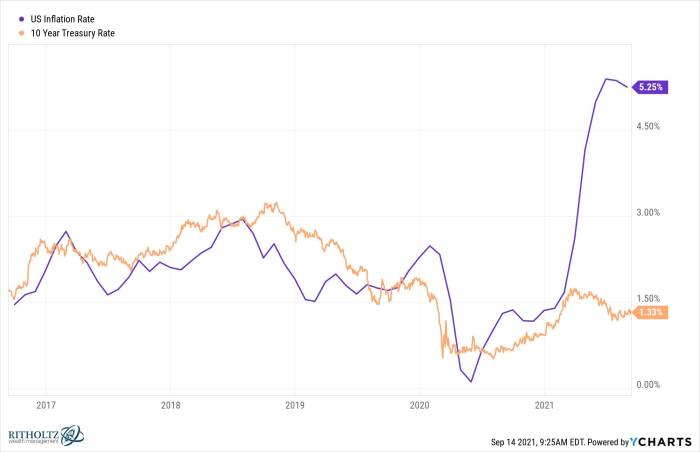 Sign up to myFT Daily Digest to be the first to know about US Inflation news.

When the softer-than-expected US CPI data dropped a few hours ago, FT Alphaville though about writing a “take”. So we opened the FT’s backend, and started typing. But after 20 or so minutes of aimless pondering about whether the latest round of consumer prices pointed to whether US inflation would be transient or not, we gave up. Because, to be honest, we have not the foggiest.

What has caught our attention about the great inflation debate between Team Transitory and the Inflationistas, is how asset prices, particularly in the bond market, have not really adjusted to the spikes in consumer prices we saw over the summer. As Robert Armstrong noted in Unhedged this morning, 5 and 10-year breakevens are circa 2.5 per cent — far below where year-on-year inflation has hit for the majority of the year — suggesting the bond market is very much in the Team Transitory camp at the moment.

Fixed income traders will only be too keenly aware of this, having seen the 10-year rise to over 1.7 per cent in February, before falling back even as the inflation numbers came in hotter and hotter.

It’s a gentle reminder to macro traders that correlations in asset prices often work until they don’t. Which we think is beautifully expressed by this chart from Ritholtz Wealth Management director, and blogger, Ben Carlson:

A lovely and logically consistent correlation, and then, total break down.

Now, given the Fed’s $120bn per month asset purchase programme, cynics might argue that the bond market has lost its power as a gauge of market sentiment. And therefore, there’s still a decent chance that inflation is here to stay. But, as FT Alphaville said earlier, we don’t have the foggiest. But what we do love, is a good chart. So thanks Ben.