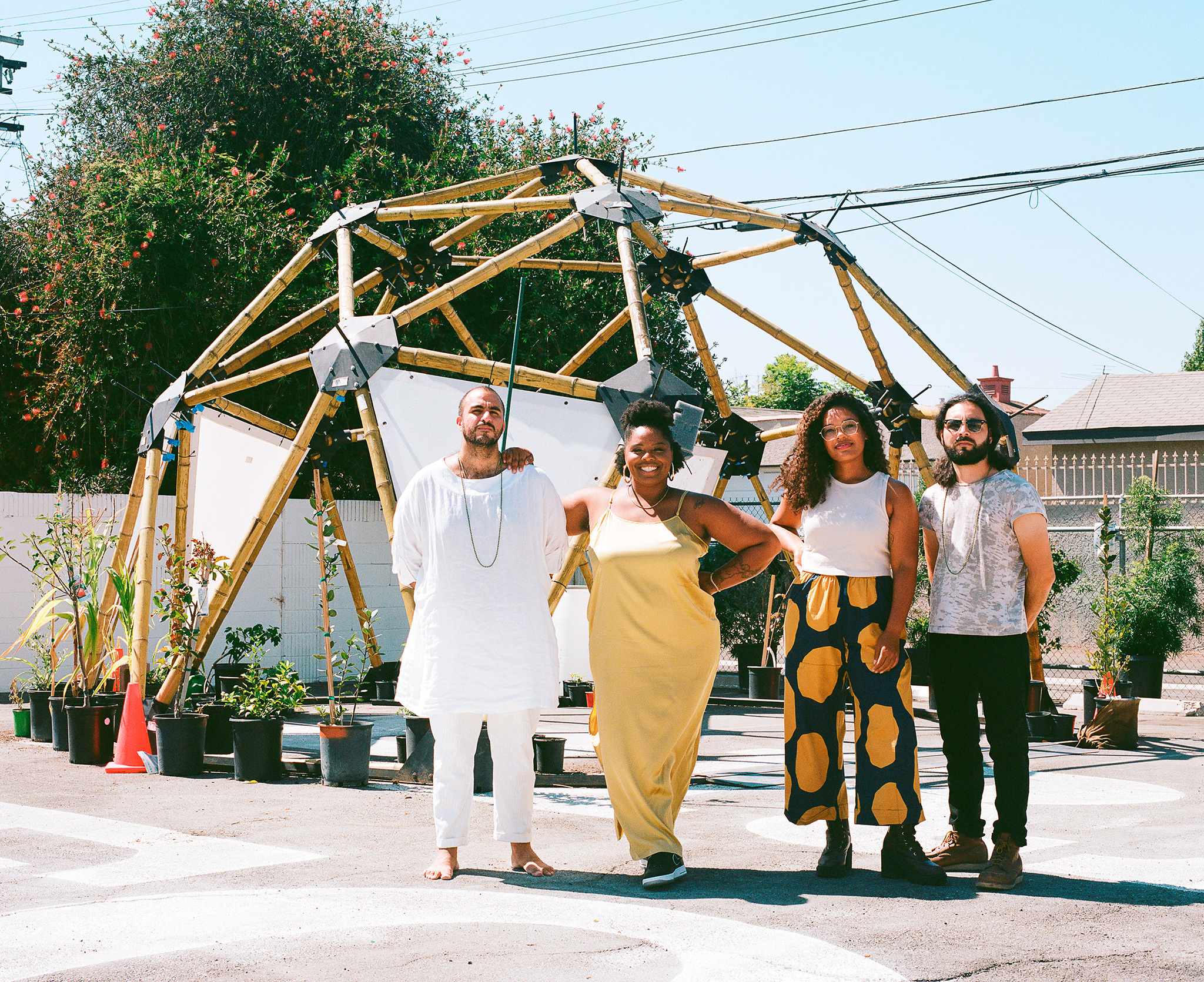 Back in 1965, just one day after the Watts Uprising, the original Crenshaw Dairy Mart opened its doors as a local convenience store for Black residents on the eastern border of the recently desegregated neighborhood. Before that, the building was constructed exactly a hundred years after Juneteenth 1865. All of this history remains in the gallery today.

“We really sat with one another to reflect on what it means to preserve the Crenshaw Dairy Mart,” says Cullors, who was also one of the cofounders of the Black Lives Matter movement. “There’s a reason that we didn’t change the sign or the name.”

Since opening in 2020—and with the most recent addition of executive director Ashley Blakeney—Crenshaw Dairy Mart has featured the work of incarcerated artists, promoted healing through ongoing prayer and urban gardening workshops, and raised funds for impacted cultural workers in South L.A.

It was always Crenshaw Dairy Mart’s mission to nourish, first and foremost. Cullors and dorriz initially had their sights set on the Antelope Valley, an area that, according to Cullors, “lacks a ton of resources and is a place that a lot of folks who have been gentrified out of the city move towards.” It wasn’t until Cullors connected with her childcare provider at Sage Garden Montessori that she discovered that a former dairy mart in Inglewood was available. “In some ways we like to say that the Dairy Mart was brought to us by my child,” says Cullors.

Much like its predecessors at the Brockman Gallery, Gallery 32 and Ankrum Gallery during the height of the Black Arts Movement in the 1960s, Crenshaw Dairy Mart is interested in advancing Black art forms. Creating a new gallery that still uses the old name and sign was a way to celebrate all who have reinvigorated a neighborhood that was once denied to them.

“In the process of tracking the legacy of the Black Arts Movement in South Central we named a history of frustration from artists of colors and Black artists,” says dorriz.

Inglewood has been at the center of division and displacement since it first bloomed into a Black neighborhood. Many parts about its growth were out of Black residents’ control even after it was racially desegregated in the mid-’60s, at which point white flight and the construction of entertainment complexes like the Forum galvanized them to think about how to create a self-sufficient city. And that continues to be the case, as many in the community still feel shut out on the approval process for even more massive sports complexes, while at the same time a gentrifying wave of white, wealthier homeowners poses an uncertain future for families living near the poverty line. In response, artists and organizers, including Crenshaw Dairy Mart, have banded to support each other and navigate their longevity and Inglewood-first values outside of a white-dominated art market.

Crenshaw Dairy Mart’s inaugural project in February 2020 was an impactful debut. “Yes on R! Archives and Legal Conceptions (Part 1: 2011-2013),” curated by dorriz and Autumn Breon Williams, made use of the gallery space to lay out a decade-long timeline of how artists acted as first responders to injustices at the hands of the Los Angeles County Sheriff’s Department in the county jails. On display was a stack of the 2,865-page L.A. County jail expansion plan alongside a paper shredder, wings made of Cullors’s brother’s used clothes for her 2020 performance piece, and an email correspondence between Cullors and the Reform L.A. Jails coalition after the L.A. County Board of Supervisors voted to put the criminal justice-focused Measure R on the ballot.

Crenshaw Dairy Mart followed up its archival work around Measure R with “CARE NOT CAGES: Processing a Pandemic,” a show co-curated by dorriz and Ana Briz that explored how public health crises underscore the ills of the prison system. The resulting unapologetic online exhibition assembled poems, comic strips, and paintings from six incarcerated artists who produced several pieces in response to the pandemic, which subjected over 48,000 incarcerated individuals to Covid-19 due to the lack of adherence to public health protocols inside prisons. “CARE NOT CAGES” not only uplifted artists who wouldn’t be in conventional commercial spaces, but it reflected on the incarcerated population’s state of precarity.

Everything is done with intention and care with the spirit leading us.

The founders’ individual practices have become fixtures at Crenshaw Dairy Mart, too. olivas, who is currently working on his own exhibition for the gallery, gravitated towards research and drawing as his primary forms, but he now considers himself a multidisciplinary artist. His work-in-progress explores a common theme across Crenshaw Dairy Mart’s installations and exhibitions: prayer and mourning.

“A lot of our work right now is rooted in the experience of being here during the uprising [in the summer of 2020], the pandemic and all these other amazing things, and a part of why it feels nice is that everything is done with intention and care with the spirit leading us,” says olivas.

olivas’s upcoming exhibition (under the working title “Let’s Pray”) asks what collective mourning looks like in a community’s healing spaces. This became an urgent question during Crenshaw Dairy Mart’s first year as a gallery as the founders observed the devastating ways that the pandemic was disproportionately impacting Black, Brown and poor communities in South L.A. Amid tragedy, the group yearned for more spaces to grieve.

“A lot of [“Let’s Pray”] has to do with group celebration and bringing folks together as much as we can through the arts,” says olivas.

Alongside olivas’s exhibition is a continuation of Crenshaw Dairy Mart’s “Pray for L.A.” programming, which will include the second iteration of their “abolition pod,” in partnership with L.A. County. The pod, a garden built within a geodesic dome, will be used for workshops on seed-to-table farming and healing, hosted by local Black farmers and abolitionist groups.

For the founders of Crenshaw Dairy Mart, art is just as much about giving as it is displaying. They feel it was a privilege to have found the space; the team thus has a duty to be a cultural retainer within Inglewood while also practicing its abolitionist values to envision a world without police, carceral solutions and a punitive society.

“It has definitely been a learning experience,” says Blakeney. “One of the biggest lessons has been about mutual accountability inside the neighborhood. There’s been a lot of hard lessons learned around art, organizing and the intersection for both of those.”

Crenshaw Dairy Mart strives for preservation in the midst of massive development—from digital billboards and new apartments to the NFL’s largest stadium—in a predominantly Black city. Uniquely, Cullors, dorriz, olivas and Blakeney have not been swept up in the pressure to adapt to the forces that stoke fears of getting left behind. Moving forward, Crenshaw Dairy Mart will keep its pace to ensure that all signs—from the personnel to the message—always point to Inglewood.