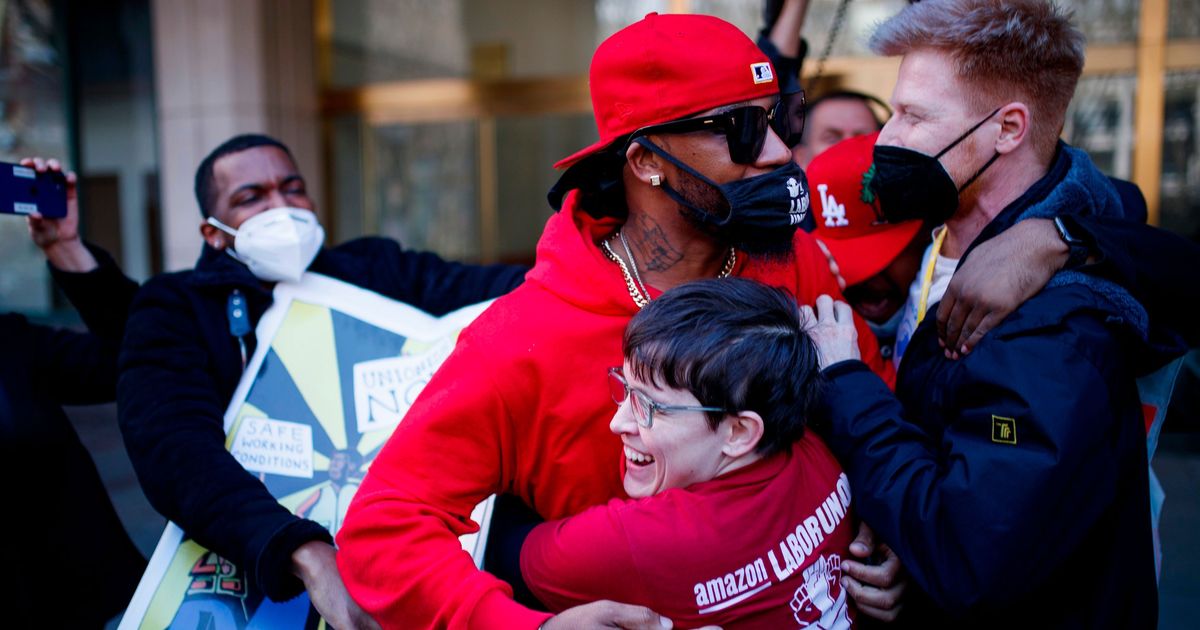 Seventy-nine years old and slouching toward a devastating midterm rebuke, President Joe Biden rarely appears to be enjoying his job these days. But some of the old spark was there Wednesday, when he addressed a gathering of building-trades unionists in Washington, D.C. Biden spoke in the first-person plural about the aims of the labor movement, as if he, too, were a union welder and not the commander-in-chief. At one point, he asserted that “the choice to join a union” should belong to “workers alone.” The line earned light applause. But then, as a playful grin spread on his face, Biden leaned into the mic and said, “By the way, Amazon, here we come.” The crowd erupted in cheers. Lifting a finger, Biden said, “Watch. Watch.”

The taunt, which came just five days after workers at Amazon’s JFK8 warehouse in Staten Island voted to become the first unionized shop at the retail giant in the U.S., was remarkably blunt for a sitting president, recalling — as did the workers’ historic victory — a different era of worker militancy and Democratic loyalty to the cause of labor. “President Biden is right,” tweeted Senator Bernie Sanders, ventriloquizing ever so slightly. “Let’s get every Amazon worker in a union.” Later that day, White House press secretary Jen Psaki seemed to hedge a bit to the press corps: What Biden “was not doing is sending a message that he or the U.S. government would be directly involved in any of these efforts or take any direct action.” But the sentiment — and the impish imprudence with which he delivered it — had hit its mark. As with other instances in which Biden appears to veer off script into folksy pugilism, the subsequent walk-back only enhanced the original charm. For a mortifying moment, the phrase “Let Biden be Biden” flashed in my mind.

Perhaps we should not be surprised; Biden thinks of himself as a union man. The PRO Act, a package of pro-union labor-law reforms, has remained a centerpiece of his domestic agenda. Last year, without naming the company, Biden expressed support for workers organizing at an Amazon warehouse in Bessemer, Alabama. One of his first actions in office was to replace Trump’s pro-management National Labor Relations Board general counsel with Jennifer Abruzzo, a much more zealous enforcer of labor law who, in December, presided over a settlement with Amazon that forced the company to allow off-the-clock workers to engage in union activity on site, a not insignificant factor in JFK8’s success. And last year, Biden appointed Lina Khan, a fierce critic of Amazon’s monopoly power, to the Federal Trade Commission.

This apparent willingness to antagonize Jeff Bezos’s empire is also notable in light of Amazon’s project, over the past decade, of recruiting an army of Democratic Party operatives to protect itself from just such antagonism. As readers may know, Amazon’s senior vice-president for global corporate affairs is Jay Carney, who was Vice-President Biden’s director of communications and later President Obama’s press secretary. Carney, according to The Wall Street Journal, has sent “frustrated messages” to his friend and to Biden’s chief of staff, Ron Klain, about “perceived slights against Amazon.” (When Carney was hired by Amazon in 2019, Klain told CNBC, “If you’ve spent time as the press secretary for the president of the U.S., you’re used to a lot of high-pressure situations — and Jay has navigated all that … That’s a big asset for Amazon.” Carney also used to play in a garage band with Secretary of State Antony Blinken.) This past year, Amazon hired a Democratic Party–aligned PR firm, Global Strategy Group, to produce anti-union materials and monitor pro-union activists at the Staten Island warehouse. Psaki is a former GSG employee. (A spokesperson for GSG told The New Yorker, “We deeply regret being involved in any way.”)

But the entanglements among the Biden and Obama White Houses, the Democrats, and Amazon go deeper. Tom Sullivan, national security adviser Jake Sullivan’s younger brother, works in Biden’s State Department; during the Trump years, he worked under David Roth, another Obama alum, on international public policy for Amazon. Mark Schwartz worked in Obama’s Department of Homeland Security for seven years and served on Biden’s transition team; now he’s an “enterprise strategist” for Amazon Web Services. Alex Haurek worked for Democrats on the Hill for 13 years before taking his job as a senior manager for policy communications at Amazon. A former aide to Biden’s labor secretary, the former Boston mayor Marty Walsh, was hired out of Walsh’s mayoral office into Amazon’s “external affairs” department in December 2020. Scott Jacobs served in the Obama administration then worked for seven years at Albright Stonebridge, the firm founded by Madeleine Albright, from which ten Biden administration officials were drawn. Jacobs is now a senior public-policy manager for Amazon. The list goes on and on. (One more, because I find it particularly insidious: Heather MacDougall, an Obama appointee who reviewed OSHA appeals for the federal government, now serves as Amazon’s VP of worldwide health and safety.)

I promise you, the list above does not exhaust even my cursory keyword search on LinkedIn. And we should not clutch our pearls. This is how the game works, and Amazon is an eager player. Carney, hired in 2015, has built a savvy and powerful operation, and Bezos has given him the resources to do it. The company spent $19.3 million on lobbying in 2021, up from $4.7 million in 2014. What this means is the personal and professional milieu from which top Democratic Party and White House officials are drawn is often one and the same as that of Amazon’s top policy and PR execs. At least one major obstacle to reorienting the party around an attitude of “Amazon, here we come” is that the people the Democrats would be “coming” for are their friends, former colleagues, and bandmates. More pointedly, they are part of the same class, a class with shared instincts, norms, and overlapping obligations. Labor militancy is not a part of that common cause.

In an era of populism and anti-elite suspicion, this reality — of an incestuous consulting class that flits back and forth between public and private power — is a profound detriment to the Democratic Party’s legitimacy.

By contrast, embracing a newly resurgent, grassroots labor movement makes good, strategic sense for Biden and the Democrats. The story of JFK8 is practically biblical in its moral clarity: A diverse group of workers withstood a campaign of harassment and misinformation from one of the most powerful, profitable, and sophisticated companies in the world — and won, opening the possibility of a better future for their families and co-workers. If Democrats, adrift and bereft of a coherent identity, are looking for a story to tell about their party, what it stands for, and who it intends to empower, they could do worse than repeating, over and over, the story of Christian Smalls, Derrick Palmer, and their colleagues.

Meanwhile, Republicans, despite their half-hearted rebranding as the “party of the working class,” are largely silent on the Amazon victory — preoccupied instead with accusing gay grade-school teachers of sexual predation. Railing against Bezos on Twitter, as President Trump often did, is one thing; cutting into Bezos’s profits via collective bargaining is another. Seizing this moment, Democrats can call the GOP’s bluff, challenging them — as Sanders often skillfully does — to pick a side between the workers and their billionaire bosses.

These, of course, are the dreamy aspirations of a labor leftist who, despite a lifetime of defeats, has learned to manage the vertiginous distance between the optimism of his will (Labor is on the march!) and the pessimism of his intellect (The Democrats are doomed, beholden to careerist professionals, and the unions are feeble fortresses clinging to their remaining membership for dear life). A stray remark from a deeply unpopular executive to a home-team crowd does not a political revolution make.

But if it remains the case that even the mild social-democratic horizons of Biden’s platform are unattainable in the absence of a much stronger organized-labor movement, something must be done. And this time is as good as any. Indeed, the conditions are ripe: a tight labor market, populist sentiments, and militant workers taking big risks and winning. Labor and the Democrats have been locked in a doddering dance toward death, but it may yet be possible to choreograph something else.