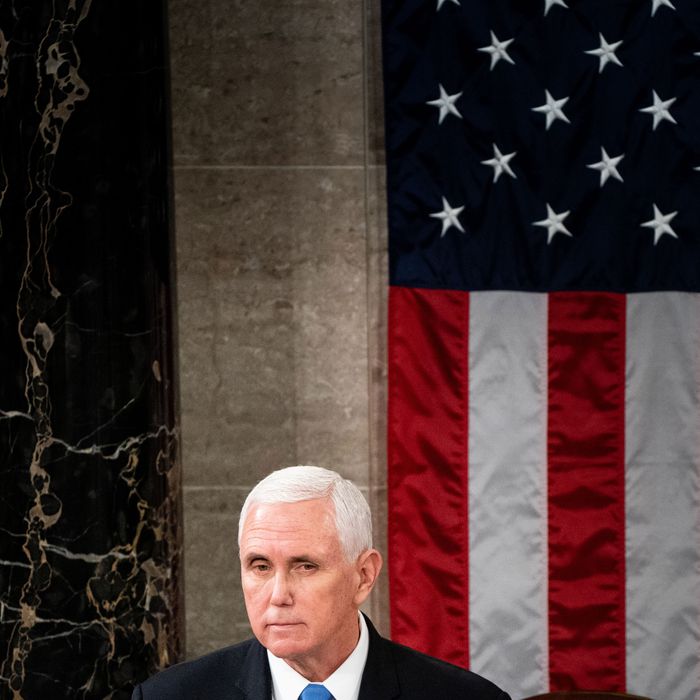 Mike Pence on January 6, after he decided not to try to steal the 2020 election for Trump.
Photo: Erin Schaff-Pool/Getty Images

In the long saga of Donald Trump’s effort to overturn the 2020 elections, the moment of most peril for democracy was not actually the outrageous attack on the Capitol on January 6. By then, the die had already been cast in Congress for the rejection of challenges to Joe Biden’s electoral-vote majority; the most the insurrectionists might have accomplished (other than, perhaps, even more horrifying violence) was to delay the inevitable. But had Trump persuaded Vice President Mike Pence to abuse his position as chair of the joint session of Congress and deny electoral votes to Joe Biden or even award them instead to Trump’s own ticket … well, the Democratic-controlled Congress would likely have overridden Pence and stopped the theft of the election. But it could have gotten dicey! At a minimum, the Big Lie of an election stolen by Democrats would have spread much more widely and thoroughly, polarizing the country even further.

Pence’s refusal to go along with Trump’s coup attempt created a heroic mythology. Even people (like me) who had no use for this lifelong ally of the Christian Right who had descended to the most embarrassingly sycophantic behavior in praising Trump’s “big shoulders” had second thoughts after Pence stood up to his boss’s bullying.

But now comes new evidence, in a book about January 6 from Bob Woodward and Robert Costa (titled, appropriately, Peril), that Pence wavered and perhaps even leaned toward helping Trump blow up democracy. If this account undermines Pence’s assumed heroism, it also raises up a new and even less likely hero: former vice-president Dan Quayle.

Quayle was long a figure of fun as the man who got torn limb from limb by Lloyd Bentsen in a 1988 vice-presidential debate and then insisted in a spelling-bee appearance during the 1992 reelection campaign that “potato” was spelled “potatoe.” When he ran for president himself in 2000, he dropped out after finishing eighth in the Ames Straw Poll the summer before the election.

But for Mike Pence, Quayle was a precursor as a Hoosier veep and social-conservative champion, so it’s natural he consulted him about the big decision on which he was initially inclined to do what Trump asked of him. According to the Washington Post’s gloss of the Woodward-Costa book, Quayle wore Pence down:

Quayle was adamant, according to the authors. “Mike, you have no flexibility on this. None. Zero. Forget it. Put it away,” he said.

But Pence pressed him, the authors write, asking if there were any grounds to pause the certification because of ongoing legal challenges. Quayle was unmoved, and Pence ultimately agreed, according to the book.

In the end it probably doesn’t matter exactly how seriously Pence thought about throwing the country into a constitutional crisis on January 6, though in some corners of MAGA-land, knowing he considered it but then got bad advice might make some folks regret the murderous feelings they harbored for him at the time. But let’s hope no one is ever again put in the position of being tempted by this devilish temptation. As Dan Quayle might put it, our Constitution cannot tolerate a coupe.


By submitting your email, you agree to our Terms and Privacy Notice and to receive email correspondence from us.