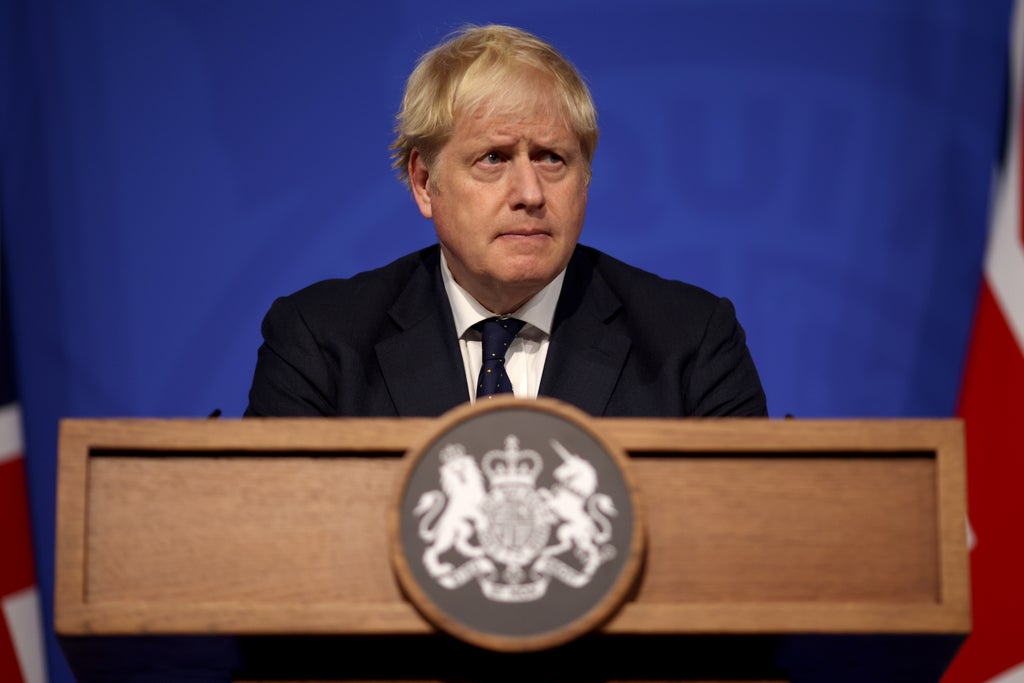 s many as 7,000 people a day could be hospitalised with Covid-19 in England if restrictions are not tightened, government scientists have warned.

There are currently around 1,000 people being treated with Covid in hospitals, but the Sage committee says that could sharply rise in the weeks ahead.

Its modelling suggested hospitalisations could reach between 2,000 and 7,000 per day next month.

However they added that infections could be curved by a “relatively light set of measures”.

The Prime Minister was urged to go hard and early if the pandemic significantly worsens by his chief scientific adviser.

Sir Patrick Vallance on Tuesday said the nation is at a “pivot point” and told ministers to react swiftly if cases quickly rise, warning “you can’t wait until it’s late because you’ve got to do more”.

The Prime Minister published his plan to first use further vaccinations, and if needed resort to mandatory vaccination passports, masks and work from home guidance, to avoid lockdowns during autumn and winter.

He appealed to the five million people who have not taken up the offer of a Covid-19 vaccine to finally get the jab in an effort to avoid tougher restrictions over the winter.

On Wednesday, Mr Johnson faces renewed scrutiny over his proposals when he faces MPs during Prime Minister’s Questions.

Sir Patrick warned at a Downing Street press conference on Tuesday that if additional measures were required, it was essential ministers acted swiftly and did not wait for the numbers to run out of control.

“So, if this goes in the wrong direction and cases go up, followed by hospitalisations, it’s important that the measures are put in place early enough and they are significant enough.”

Earlier, Health Secretary Sajid Javid confirmed all over-50s in the UK – as well as those in other vulnerable groups – would be offered a booster shot to maintain protection levels as the country enters the autumn.

Mr Johnson said he hoped the vaccination programme meant the UK could remain “one of the most free societies” in Europe with only limited restrictions to keep the disease in check.

However, he stressed the Government stood ready with a “plan B” for England if the disease took off again over the coming months.

He said it could include mandatory Covid certification – so-called vaccine passports – as well as the return of face masks in public places and encouraging people to work from home.

If the country had gone into last winter – before the vaccinations were available – with the current level of restrictions, cases would, he said, have gone “through the roof”.

He said it underlined the importance of getting the vaccine to as many people as possible.

“There are five million or so people who are eligible for vaccines now who haven’t been vaccinated,” he said.

“Trying to persuade those people it is the right thing to do to get vaccinated would make a significant difference.”

Mr Johnson said the Government’s plan B had “a number of different shots in the locker” with which it could respond if cases started rising.

“You wouldn’t necessarily play them all at once, far from it, you would want to do things in a graduated way,” he said,

“We’re now in a situation when because so many of the population have some degree of immunity, smaller changes in the way we’re asking people to behave can have a bigger impact.”

While he did not want to see vaccine passports required for entry into nightclubs and other venues, as the Government had previously proposed, Mr Johnson said it was “not sensible” to rule it out at this stage.

Professor Chris Whitty, England’s chief medical officer, emphasised that the county was entering the autumn with a much higher level of cases, hospital admissions and deaths than was the case last year.

Under the booster programme, people will be offered either the Pfizer/BioNTech or the Moderna vaccine at least six months after their second dose in order to maximise the impact.