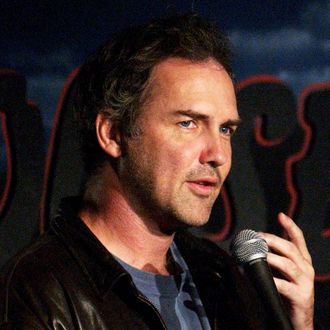 The news of Norm Macdonald’s death on September 14 came unexpectedly to a community, and an industry, that revered him. The comedian kept his health struggles private, making his death all the more shocking to his fans and peers. “We loved Norm Macdonald,” Steve Martin wrote in a tweet. “One of a kind.” “I was a huge fan of his delivery and I essentially ripped off his delivery when I first started acting,” Seth Rogen tweeted. David Letterman, Edgar Wright, Patton Oswalt, Whitney Cummings, Nish Kumar, and even Nancy Sinatra were just a few of the people who also joined the public outpouring of grief that has erupted since the news broke. Some shared clips of their favorite Norm moments, while others praised him as a one-of-a-kind genius. Here’s a roundup of what tributes to Macdonald have been shared so far:

I was always delighted by his bizarre mind and earnest gaze. (I’m trying to avoid using the phrase, “twinkle in his eyes”). He was a lifetime Cy Young winner in comedy. Gone, but impossible to forget.
Dave Letterman

Every one of us loved Norm. Some of the hardest laughs of my life with this man. Most fearless funny original guy we knew. An incredible dad. A great friend. A legend. Love u pal. pic.twitter.com/2Pftw28uPc

I am absolutely devastated about Norm Macdonald. Norm had the most unique comedic voice I have ever encountered and he was so relentlessly and uncompromisingly funny. I will never laugh that hard again. I’m so sad for all of us today.

My dear friend Norm MacDonald passed after a brave 10 year battle. He was one of our most precious gems. An honest and courageous comedy genius. I love him.

We loved Norm MacDonald. One of a kind. https://t.co/0sXoCLEtuG

NOOOOO GODDAMIT. Oh my God what is even happening.

Good bye, Norm. You were never not 100% hilarious. https://t.co/loW3QsEjgW

I’ve got so many laughs in my life by just repeating Norm MacDonald jokes. One of the funniest to ever do it – RIP to a king

Oh fuck. I was a huge fan of Norm Macdonald and I essentially ripped off his delivery when I first started acting. I would stay up specifically to watch him on talk shows. He was the funniest guest of all time. We lost a comedy giant today. One of the the all time greats. RIP.

No one could make you break like Norm Macdonald. Hilarious and unique. Fuck cancer.

Norm MacDonald was a true GOAT. As a comic, as a talk show guest. A true original. He tweeted this to me as my dad was dying from cancer in 2014, “I’m just an idiot, Laurie but I found when I embraced the pain as tightly as I could it became love. I pray for you.” RIP Norm. 🇨🇦

Of the many addictive rabbit holes you can disappear down on the internet, the most pleasurable is ‘Norm MacDonald chat show appearances’. Thanks for all the laughs Norm, very sorry to see you go. https://t.co/ahxZNRdJEw

RIP Norm Macdonald. One of the most original comedians ever. Funny & bizarre & unpredictable with a singular comedic voice. We lost one of the greats.

This photo was taken after I was a guest on Norm’s show. At dinner the laughs just continued nonstop. He will be missed. RIP Norm Macdonald pic.twitter.com/DToJCUBdU2

Norm is the pinnacle of bravery and originality. 💔 https://t.co/UfeNoEUlUv

Damn. Norm Macdonald – legend – one of the funniest ever. Lots to choose from but this is maybe my favorite. https://t.co/EOi1So7HJ0

This awful news took my breath away. Sending love to his family and friends.

In such a divisive time even among comedians, we can all agree Norm MacDonald was the best. Rest In Peace.💔

I will spend today as I spend most days: watching clips of Norm Macdonald

RIP Norm MacDonald. I saw him perform live when I was in college. It was one of the most memorable performances I’ve ever seen. A complete mastery of standup comedy performance and an unparalleled passion for the art of writing jokes. Never met him. Love to his friends & family. https://t.co/gpWlNy2hwN

Battling cancer for 9 years without telling anyone is the most Norm Macdonald shit ever.

Words can’t describe how saddened I am to hear of the passing of my friend. Rest In Peace @normmacdonald Here we are sharing some laughs https://t.co/4Tbm5Wbdol

After Norm McDonald was fired from SNL for making too many OJ jokes (by the head of NBC – OJ’s friend) he was asked back to host and this was his monologue. 🤣https://t.co/uKnzfgwE66

Nobody was funnier than @normmacdonald. He made comedians feel like we hadn’t even started doing comedy yet. No formulas, no pandering just purely what he thought was funny. Oh yeah, incidentally one of the sweetest guys I’ve ever known.

The confidence it takes to tell a joke like this on a talk show is something I’ll always marvel at. Norm Macdonald was fearlessly funny #RIP https://t.co/DIQmAAhMfb

I am absolutely devastated about Norm Macdonald. Norm had the most unique comedic voice I have ever encountered and he was so relentlessly and uncompromisingly funny. I will never laugh that hard again. I’m so sad for all of us today.

Battling cancer for 9 years without telling anyone is the most Norm Macdonald shit ever.

Can’t believe Norm MacDonald is dead. First met him in the mid 80s. I thought he was way too funny to be successful. I was half right. My deep sympathy to his family, close friends and his fans. #ripNorm

NORM MACDONALD MY HEART BREAK FOR YOU BUBBA. YOU ARE BEST MAN GENIUS FUNNY MAN I LOVE YOU FOREVER GOD BLESS YOU. pic.twitter.com/V6a3DnU71g

To so many people in comedy, me included, there was nobody funnier than Norm MacDonald. You always hoped he would hang around after the work was done, just so you could hear his stories and get a laugh. So hilarious and so generous with his personality. I’m gonna miss him.

In my opinion, Norm MacDonald was the funniest Weekend Update anchor. It’s worth remembering that he was dropped because a high-level NBC executive thought he was too mean to OJ Simpson. Ah yes, Corporate Media, they always have our backs.

I love the science of comedy. Comedy nerds know that the one step beyond #TheAristcrats was the time Norm Macdonald decided to commit to doing a kitschy mediocre roast for Bob Saget. It was beyond trolling.

I saw this @ConanOBrien when I was still in High School and I don’t think I ever laughed as hard as I did when I was seeing this live, @normmacdonald was a genius. https://t.co/GiPzocTzXQ

Norm Macdonald has passed away. He was one of the best comics ever. After we talked in 2011 I couldn’t believe what an amazing talk it was. I still can’t. One of the best episodes. Here it is. RIP https://t.co/344Ph5pFjn

Today is a sad day. All of us here at SNL mourn the loss of Norm Macdonald, one of the most impactful comedic voices of his or any other generation. pic.twitter.com/KQYuuz5eM9

“Why do dogs always race to the door when the doorbell rings? It’s almost never for them.” – Norm MacDonald.

“Norm @normmacdonald was a great talent, and I loved laughing with him on SNL. *Bob Dole* will miss Norm Macdonald.” pic.twitter.com/gPsdyJ5tS9

Never forget this Norm Macdonald appearance on Conan in 1997 — with Courtney Thorne-Smith.

Hilarious. All of it.

There was no one like Norm MacDonald ; Every time I watched him perform was a gift. Thank you Norm … thinking of you and your family on this sad day. pic.twitter.com/BfEtja3tqB

“There are two things which a man should scrupulously avoid: giving advice that he would not follow, and asking advice when he is determined to pursue his own opinion.”

Found a sweet pic of Norm MacDonald when he was a young kid. Just hanging on the couch. But I guarantee you… he was still the funniest person in that room. pic.twitter.com/gUZH4XPAka

In 2008 I won a stand-up contest at the WPB improv & got to open for Norm Macdonald. I was so nervous but he was unbelievably nice, hysterical & encouraging. He joked with everyone in the green room & offered punch ups & advice. It was incredible. We lost a real legend today. pic.twitter.com/daXR2181Hj

No one did Burt better than Norm. Not even Burt! RT @PhredJonz: Norm MacDonald’s legendary take on Burt Reynolds on the Jeopardy skits will forever be in the Hall of Fame of Best SNL Characters. Rest In Peace. #TurdFerguson pic.twitter.com/2i5MLR1fEa

Sorry to hear about the death of Norm Macdonald. He was one of the greats of comedy. And he was also a really good guy. He will be missed. pic.twitter.com/wdZnnooKPE

I really really liked norm macdonald a lot. like from the first time I heard his weird ass voice on SNL. sometimes I listen to clips of him talking on YouTube for hours. rest in peace

I think about these two and a half pages from Norm Macdonald’s book constantly. When I reviewed it, I wrote that they would “make for a fine eulogy”—and I swear I didn’t mean anything by it. But they do. pic.twitter.com/vxLRAd2OeP

Let me pause my meaningless online arguments to say Norm was one of the greatest comedians to have ever lived. One of the best moments of my career was when he found something I did funny. Very few comics will ever possess that level of mastery. RIP. https://t.co/VrsnVRCUZ9

One of the funniest people #SNL ever produced is gone, but will never be forgotten. I’ve spent many an hour on YouTube over the years enjoying all the characters he gave us. In a word: HILARIOUS.🤣Thanks for a lifetime of laughs @normmacdonald. #RIP 💔 pic.twitter.com/pK9lK3Rz87

Norm you lit up any room. I’m shocked that you’re gone so soon. I loved being with you and working with you. I miss you already. #rip #NormMacdonald @normmacdonald