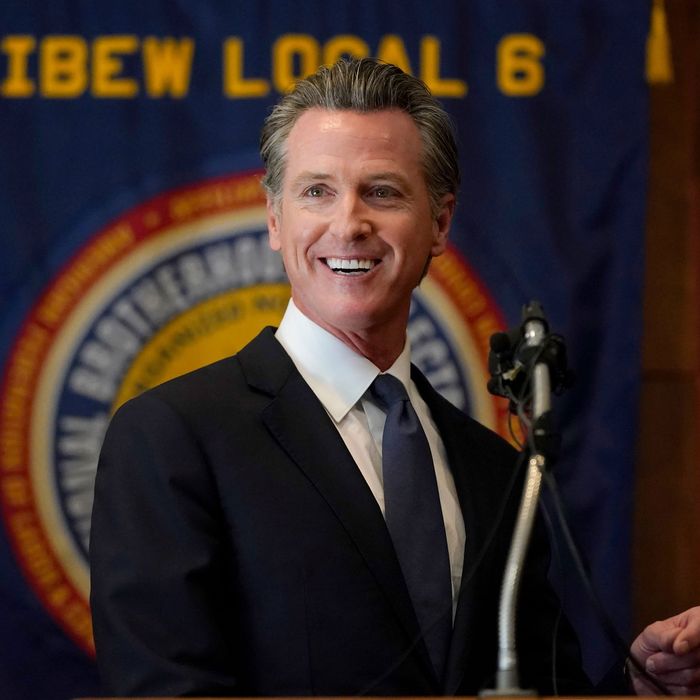 After an expensive, complex, and noisy campaign, early mail ballots — the first votes counted in California — are showing Governor Gavin Newsom winning a decisive victory in the state’s second-ever recall election. Newsom, whose self-inflicted wounds during the pre-Delta phase of the COVID-19 pandemic made him only the the second governor in the state’s history to face recall, survived the scare thanks to a lavishly-funded anti-recall effort; his state’s strong Democratic advantage; and a divided and not terribly compelling Republican field of would-be replacements. The election was called by NBC, CNN, and the Associated Press less than an hour after voting ended, with Newsom mobilizing heavy support in the state’s urban and coastal Democratic strongholds. The results were in stark contrast to the previous gubernatorial recall election in 2003, when Democratic incumbent Gray Davis was removed from office and Republican Arnold Schwarzenegger was elected to replace him.

California’s 22 million registered voters were presented with two questions on their ballots: Whether to recall Newsom from office, and which of the 46 “replacement candidates” should become governor should that happen. About half the voters who filled out an answer to the first question skipped the second, reflecting the Democratic Party’s sustained effort to undermine interest in the replacement contest (in part by discouraging well-known Democrats from running). As expected, conservative talk show host Larry Elder is comfortably winning the now-irrelevant replacement race with a strong plurality of the vote.

Late-arriving mail ballots will still be counted for a week so long as they were postmarked by today. And the “no” margin will likely shrink at least temporarily later tonight as votes cast in person on Election Day (recently a Republican preference thanks to Donald Trump’s many attacks on voting by mail) are tallied. But in the 2020 general election held under the same procedures, 87 percent of votes were cast by mail, so the massive lead for “no” is secure. As of late this afternoon, 9.7 million mail ballots (44 percent of all those sent out) had been returned. Tracking of returned ballots by party registration showed that just over half of them were cast by Democrats; just over a quarter by Republicans; and the balance by independents, who lean pretty decisively Democratic in the Golden State. Recent polls also showed “yes on recall” trailing “no” votes by a steadily increasing margin (15.8 points in the FiveThirtyEight polling averaging and 14.5 percent at RealClearPolitics). So all the late signs were pointing to a Newsom victory despite the huge scare the recall threw into the ranks of the state’s dominant Democrats. As recently as late August, the election looked very close.

The trend that saved Newsom can be explained in multiple ways. The “no” campaign outspent its opponents handily, and took advantage of the state’s partisan makeup by depicting the recall as a Trump-inspired power grab in a state where Democrats have nearly a 2-1 registration advantage, control every statewide office, and hold super-majorities in the legislature. Team Newsom (with some help from rival Republican candidates) also amplified media revelations about the extremism and dubious personal conduct of Larry Elder, who emerged as the top replacement candidate soon after entering the race in July. And finally, a possible turnout gap between excited Republicans favoring a recall and apathetic or complacent Democrats opposing it faded as the campaign reached its peak (all those ballots arriving in the mail had a particularly significant effect). It looks like the percentage of Democrats voting could match or even exceed that of Republicans.

There will be a lot of “lessons learned” commentary on this election. Clearly the big one for incumbent governors from either party who might face a recall is this: Do not inflame people who already resent the pandemic measures you have imposed by ignoring your own rules and attending an unmasked indoor party for a lobbyist friend at one of the world’s most exclusive restaurants. Had Newsom not made this big mistake at around the same time as many Californians were giving up their own family Thanksgiving dinners in 2020, the perennial Republican effort to recall every Democratic governor would have died, like nearly all of them have. Newsom’s comeback was also instructive. Aside from what his campaign against the recall accomplished, he was helped a great deal by his management of COVID’s Delta resurgence, which he handled more adeptly than he did the original pandemic (or than many other governors handled Delta).

As for Republicans, they would be wise to avoid the undocumented “voter fraud” accusations that Elder and Donald Trump were making before the first vote was reported. To Californians who haven’t drunk the MAGA Kool-Aid, they are beginning to look and sound like a cult, which isn’t helpful given their minority status in the state. They should also express some regrets about climbing aboard the failed recall train, which leaves them in a weakened condition for the next general election in 2022. And much as they allegedly hate pandemic accommodations like expanded voting by mail, Republicans should understand that the recall would have never even gotten off the ground had not a judge given petition circulators a four-month extension in the deadline as a pandemic accommodation.

Finally, California voters and their legislators might also want to take a look at their recall law and see if they really want to encourage this complex and expensive form of between-regular-elections accountability. It gave us political writers some excitement, but in the end it changed nothing.


By submitting your email, you agree to our Terms and Privacy Notice and to receive email correspondence from us.