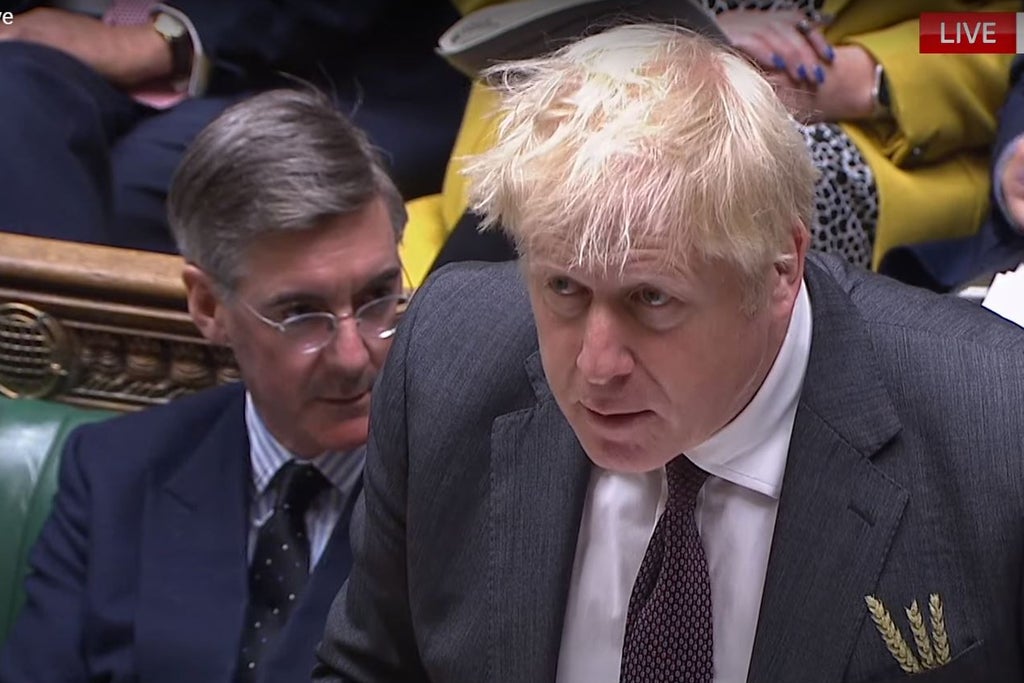 oris Johnson is being grilled at Prime Minister’s Questions this lunchtime amid rumours of a looming Cabinet reshuffle.

The PM is locking horns with Sir Keir Starmer a day after he and Sajid Javid unveiled “plan B” contingency measure should the strain on hospitals become too great.

Speaking on Sky News, Mr Javid said there were no “risk-free” options.

The PM says: “We banned fur farming in this country for a long time and will look at what we can do working with the fur sector.”

He asks the PM if he can say “how much Tory government cuts to social welfare will cost the average nurse”.

No answer from Johnson, who is now reeling off a list of Tory achievements, including a claimed increase in nurses.

Blackford replies: “The average nurse will lose £1,143 a year … the cost of living is spiralling and people are being left with a Prime Minister who doesn’t know how much his cuts are hitting key workers.”

The PM says “we are funding the NHS across the UK, including in Scotland I’m proud to say, in record sums”.

PMQs: Debate over UC cut vote to come this afternoon

Sir Keir Starmer asks Boris Johnson if he will vote with Labour to prevent cuts to Universal Credit and stop “clobbering working people”.

Johnson replies by saying employment and wages are up in the UK and mocks Sir Keir for penning a 14,000 word “essay” on the matter.

He says: “Having listened to what he has to say … his non-existent plan for social care, I can compress his 14,000 word essay to four – vote Labour, wait longer.”

Sir Keir is highlighting the fact that Boris Johnson has so far failed to answer any of the questions regarding the Universal Credit cut.

He says: “We’ve had three questions and the Prime Minister hasn’t answered one of them.

“Millions of working families will be hit hard by the PM’s Universal Credit cut.

“Why would they have to work the extra nine hours to make back the £20 cut? It’s because of his broken tax system.”

He adds that working parents will not be able to work the hours to make back the cuts.

Johnson replies: “They [Labour] don’t have a plan for Universal Credit, they want to scrap it.”

PMQs: Single parents would have to work 9 extra hours to make back UC cut – Labour

The first question is about Universal Credit, with Labour leader Sir Keir Starmer asking how many extra hours workers would have to work to make back the £20-a-week cut.

This follows comments from the minister Therese Coffey, where she said it was a case of people working longer to make up the cost.

Sir Keir highlights this and asks if it would be more or less than the two hours referenced by Coffey.

Boris Johnson once again refuses to answer the question and is now talking about Costa Coffee paying more and says the chain would still be closed if it were up to Labour.

Sir Keir says: “I’ll give the PM the answer to the question – it is much, much higher. A single parent would have to work more than nine hours a week on top of their full-time job to make up the difference.”

He adds that this equates to an extra day of work a week and asks how people are expected to cope. Johnson does not answer the question.

PMQs about to begin

PMQs is about to begin with Boris Johnson set to be grilled on Covid winter plan at Prime Minister’s Questions this lunchtime amid rumours of a looming Cabinet reshuffle.

The PM will lock horns with Sir Keir Starmer a day after he and Sajid Javid unveiled “plan B” contingency measure should the strain on hospitals become too great.

China tightened lockdowns and increased orders for mass testing in cities along its east coast Wednesday amid the latest surge in COVID-19 cases.

Checks have been set up in toll stations around the city of Putian in Fujian province, with a dozen of them closed entirely. The nearby cities of Xiamen and Quanzhou have also restricted travel as the delta variant spreads through the region.

The National Health Commission on Wednesday said an additional 50 cases had been diagnosed in various parts of Fujian, most of them in the Putian region.

Since the start of the pandemic, first detected in late 2019 in the central Chinese city of Wuhan, China has imposed strict testing, lockdowns, quarantines and mask wearing requirements.

Fujian has seen at least 152 new cases in recent days, prompting stay-at-home orders and the closure of entertainment, dining and fitness venues, along with the cancellation of group activities including those for the upcoming Mid-Autumn Festival holiday.

Long-distance bus service to other parts of the province has been suspended.

Global health leaders have urged the UK and other wealthy nations to adopt a worldwide approach to tackling coronavirus as they raised concerns about new and emerging variants.

Giving healthy adults in rich nations booster jabs and vaccinating children should not occur when there are millions of at-risk adults yet to receive a first dose, experts said.

On Tuesday, UK health leaders announced a booster programme would begin imminently for 30 million adults over 50 and health and care workers.

But Dr David Nabarro, World Health Organisation (WHO) special envoy for Covid-19, criticised the plan to give third vaccines to millions and first jabs to children aged 12 and over.

He told Sky News: “I actually think that we should be using the scarce amounts of vaccine in the world today to make sure that everybody at risk, wherever they are, is protected – and you’re at risk if you’re a health worker, you’re at risk if you’ve got diabetes or heart disease or immune suppression.

“So why don’t we just get this vaccine to where it’s needed?”

Tory MPs do not need to wear masks in the Commons because they are not “strangers”, the Health Secretary has said.

Sajid Javid said the Government’s advice was that people should consider wearing face coverings when they were gathered in a crowded space with people they did not normally mix with.

He said a photograph of the Cabinet meeting on Tuesday, showing ministers around the table with their faces uncovered, was consistent with that advice.

People should be allowed to continue to work from home rather than being forced back into offices, a scientist advising the Government has said.

Professor Stephen Reicher, a member of the Scientific Pandemic Insights Group on Behaviours (SPI-B), which feeds into the Scientific Advisory Group for Emergencies (Sage), said the number of contacts people had per week had risen to the highest number for a year, mostly down to people having to go into work.

It comes after a consensus statement from the Scientific Pandemic Influenza Group on Modelling operational sub-group (SPI-M-O) said there is still “the potential for another large wave of hospitalisations” as the pandemic continues.

SPI-M-O said: “There is a clear consensus that continued high levels of homeworking has played a very important role in preventing sustained epidemic growth in recent months.

“It is highly likely that a significant decrease in homeworking in the next few months would result in a rapid increase in hospital admissions.”