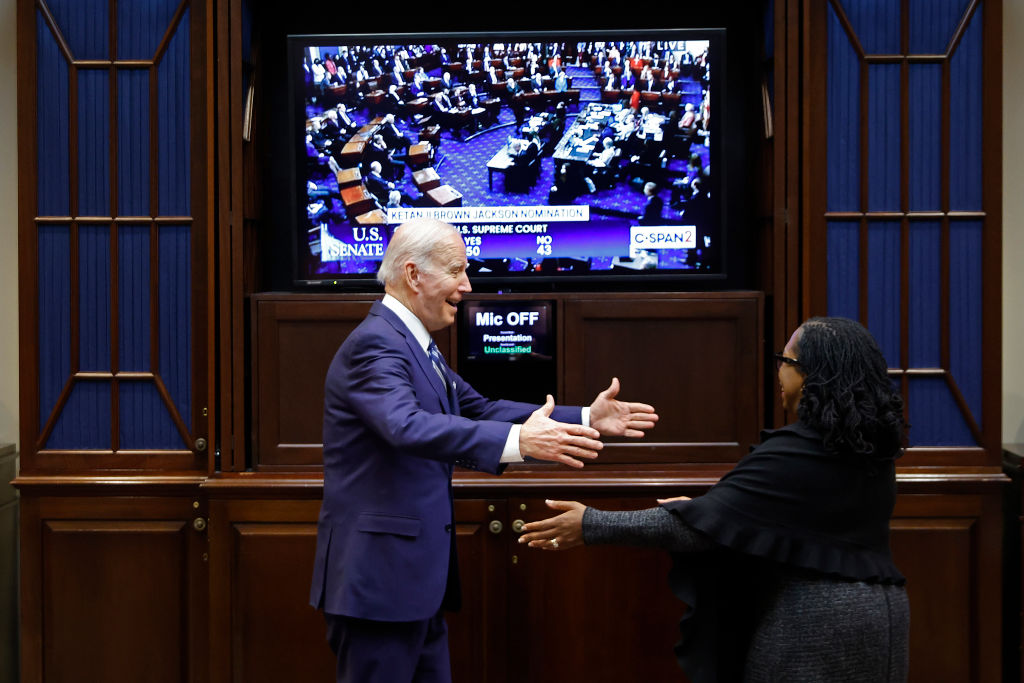 Jackson, a 51-year-old appeals court judge with nine years of experience on the federal bench, was confirmed 53-47 by the Senate Thursday, mostly along party lines.

“We’ve taken another step toward making our highest court reflect the diversity of America,” Biden said in a tweet Thursday after posing for a selfie with the justice-in-waiting. “She will be an incredible Justice, and I was honored to share this moment with her.”

NewsNation will live stream Biden’s and Jackson’s remarks in the player above.

In her confirmation, Jackson made history by becoming the third Black justice and only the sixth woman in the court’s more than 200-year history. Jackson will take her seat when Justice Stephen Breyer retires this summer.

Jackson would be the current court’s second Black justice — Justice Clarence Thomas, a conservative, is the other — and just the third in history. Jackson would replace retiring Supreme Court Justice Breyer. Biden nominated Jackson in February.

The 51-year-old federal appeals court judge would join two other women, Sonia Sotomayor and Elena Kagan, on the liberal side of the current 6-3 conservative court. With Justice Amy Coney Barrett sitting at the other end of the bench, four of the nine justices would be women for the first time in history.

While the vote was far from the overwhelming bipartisan confirmations for Breyer and other justices in decades past, it was still a significant bipartisan accomplishment for Biden in the narrow 50-50 Senate after GOP senators aggressively worked to paint Jackson as too liberal and soft on crime.


‘It’s time to cut back’: Tips to prepare for a US recession

Before the Senate Judiciary Committee last month, Jackson said her life was shaped by her parents’ experiences with racial segregation and civil rights laws that were enacted a decade before she was born.

With her parents and family sitting behind her, she told the panel that her “path was clearer” than theirs as a Black American. Jackson attended Harvard University, served as a public defender, worked at a private law firm and was appointed to the U.S. Sentencing Commission in addition to her nine years on the federal bench.

“I have been a judge for nearly a decade now, and I take that responsibility and my duty to be independent very seriously,” Jackson said. “I decide cases from a neutral posture. I evaluate the facts, and I interpret and apply the law to the facts of the case before me, without fear or favor, consistent with my judicial oath.”

Once sworn in, Jackson would be the second-youngest member of the court after Barrett, 50. She would join a court on which no one is yet 75, the first time that has happened in nearly 30 years.