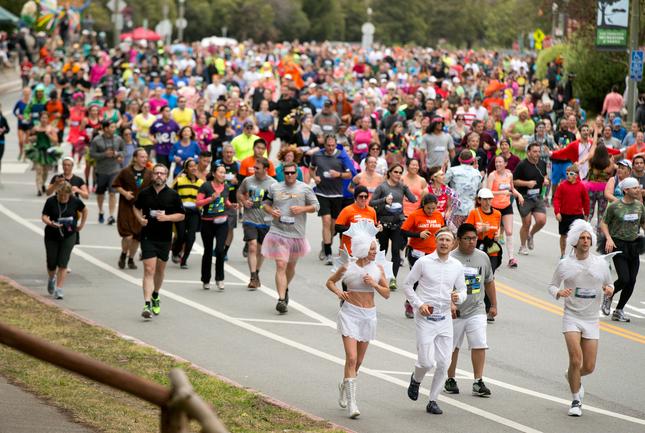 After the coronavirus chased the Bay to Breakers footrace out of San Francisco for two years, the legendary, colorful and hugely popular run is back.

At 8 a.m. Sunday, participants will begin the 12-kilometer event near the San Francisco Bay at Howard and Main streets, and cut across the city to the Pacific Ocean, climbing the Hayes Street Hill, passing through Golden Gate Park, and crossing the finish line at the Ocean Beach parking lot. Costumes are common at the Bay to Breakers, which started in 1912, and attracts tens of thousands of participants, from families walking to elite athletes burning up the asphalt.

Racers and spectators may catch a — possibly fleeting — glimpse of Markelle the Gazelle, aka Markelle Taylor. The Gazelle grew up in San Francisco watching the Bay to Breakers pass by, ran the mile relay for Foothill College in the early ’90s, then went to prison a few years later and during almost 18 years of incarceration trained to become a highly regarded marathoner while inside San Quentin. He was released in 2019.

“This is going to be my first time going back into a city I love and running this thing,” said Taylor, 49, of Tiburon, who added that he’s still recovering from finishing the Boston Marathon in two hours and 52 minutes last month, so he’s unsure how gazelle-like his performance will be.

The Bay to Breakers is also legendary for creating traffic and transportation chaos. Many streets in the city will be closed, with the San Francisco Municipal Transportation Agency warning of major delays on some Muni routes.

Caltrain said it would run two, special limited-stop trains to San Francisco that will arrive before the start, with service starting at 5:50 a.m. at Diridon Station in San Jose and making stops up the Peninsula, but not at the Santa Clara and Bayshore stations. After the race, Caltrain will add capacity to accommodate expected crowds, it said.

BART said it will put on extra service, with four trains on limited stops before regular service begins, to get race participants to Embarcadero Station around 7 a.m.