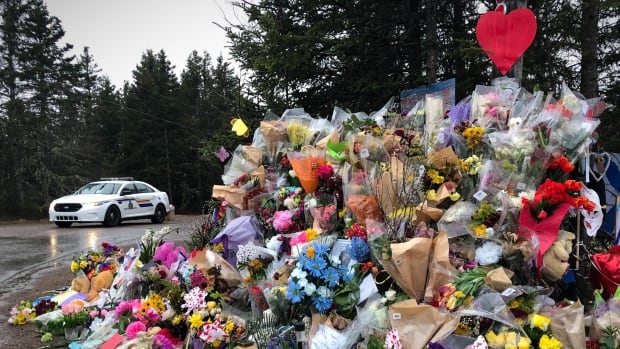 When Gerry Dykens got a wave from the man behind the wheel of a police cruiser in Debert, N.S., on the morning of April 19, 2020, he thought the officer had likely had a long night in the nearby community of Portapique.

Dykens, of nearby Masstown, N.S., heard from a friend there had been a shooting in Portapique where many were killed and the gunman hadn’t been caught — but knew nothing about his mock cruiser.

“He kind of smiled when he waved, and I could tell by the way he was sitting in the car that he was quite a big man,” Dykens said in an interview with CBC.

Dykens is one of at least 44 people who crossed paths with the shooter, saw his replica police cruiser as he moved across the province, or missed meeting him by moments during the hours from when the killings began in Portapique, to when the gunman made his way to Plains Road in Debert the next morning.

As Nova Scotians learn more about what happened during the mass shooting in April 2020 through a public inquiry, details from various witnesses show how close dozens of people, including families with children, came to the gunman.

There are others who reported seeing a car that could have been the gunman on April 19, but the timing wasn’t verified by police. Others might have not reported at all, unaware of the significance of what they’d seen.

The man Dykens had passed just before 10 a.m. near the post office and elementary school in Debert on Plains Road was the gunman, who was disguised as a Mountie.

Believing the gunman was a real officer, he said he would have pulled over to the side the road if the lights on the replica cruiser had been activated.

“So that kind of haunts you a little bit,” Dykens said.

While Dykens said he feels lucky, and his thoughts are always with the 22 victims who were killed during the 13-hour rampage and their families, he’s highly aware he could have also died that morning.

“You do think about it. There’s no question about that,” he said.

Dykens called into the RCMP tip line with his account a few days after the shootings. An officer took his brief statement over the phone, but Dykens’s account is not in the official timeline released by the commission.

By mid-morning on April 19, the RCMP had only released a few details about the gunman and his vehicle through Twitter, and many people in the area had little idea of the danger. Some were out on the roads.

“It could have been so much worse,” Dykens said.

The details of the close calls are laid out in interviews, radio logs and 911 transcripts gathered by the Mass Casualty Commission leading the inquiry. The commission is tasked with examining the events of April 18 and 19, 2020, when Gabriel Wortman killed 22 people, including Beaton, who was pregnant.

During the roughly 45 minutes the gunman was active in Portapique and killed 13 of his neighbours, another 18 people had close calls with him, including worried community members investigating explosions and gunshots.

Former Portapique resident David Faulkner happened to be driving by the area with his partner and their daughter when they saw flames lighting up the sky. He decided to turn into the community to check on a friend, and wondered whether a brush fire had gotten out of hand.

Faulkner couldn’t reach his friend, and as he drove out of the subdivision his vehicle came upon another car meeting the gunman. Faulkner heard two “explosions or gunshots,” and saw both cars take off quickly. Inside one of them was Andrew MacDonald, who was shot while his wife, Kate, was on the phone with 911.

Faulkner trailed behind slowly until the cars reached the intersection, and he followed the MacDonalds right onto Portapique Beach Road. To do so, he had to pass within just a few feet of a “cop car,” which had stopped across the intersection and had no lights on at all.

“Which seemed strange, so we just made the corner and kept on going for some reason. Why, I have no idea. I’m glad I did now,” Faulkner later told police.

Another man, Bjorn Merzbach, saw the gunman race alongside the MacDonalds as he crouched behind his truck with a gun in his hand outside his home on Orchard Beach Drive in Portapique.

After talking with Andrew MacDonald later, Merzbach said what scared him most was realizing how long the gunman had been across the street at the home of Dawn and Frank Gulenchyn, one of the couples killed that night.

“Maybe he just didn’t think he had time to come back in my driveway or he knew that I was gonna be more prepared,” Merzbach said.

Dean Dillman may have missed the gunman by just a minute.

The commission has suggested the shooter left Portapique via a private back road (called blueberry field road by locals) then continued on Brown Loop Road to Highway 2 between 10:41 p.m. and 10:45 p.m.

Dillman, who has a background in forest firefighting, came over to check on the fires. He was parked on the southwest corner of Brown Loop in front of the blueberry field road from about 10:45 p.m. to 10:55 p.m., and did not report seeing the gunman or his vehicle.

“I was probably sitting in his tire tracks,” Dillman said in an interview with the commission.

After leaving Portapique the gunman’s cruiser was captured on surveillance video in Great Village at 10:51 p.m., and eventually turning into the Debert business park at 11:12 p.m.

En route to Debert and in the community that night, there were seven people who saw the gunman or just missed him, including two people on Station Road and RCMP constables Paul Cheesman and Marc Blinn.

Two young people listening to music were hanging out in a football field off Ventura Drive and saw the gunman’s police cruiser driving in circles around midnight. They later told police how strange that had been.

After stopping for the night in Debert, the gunman drove to the home of Sean McLeod and Alanna Jenkins on Hunter Road in Wentworth. They were shot and killed there, and the gunman set the house on fire.

Two people there had close calls, including April Dares, who heard a dog barking, followed by gunshots. She was worried the dog had been hurt, so around 7:30 a.m. she drove her truck north on Hunter Road.

She had stopped just two driveways down from the McLeod-Jenkins house, when a “little voice just said, ‘OK, go home.’

Around 9:15 a.m. Dares spotted the gunman’s cruiser as he left the area, as did another neighbour, Jody MacBurnie, a few minutes later.

MacBurnie was standing outside his home on the phone with RCMP, talking about how he was worried he couldn’t reach McLeod. The cruiser then drove by “really slow,” which he thought was odd.

“I said to my wife this is, something’s f–king weird because I was on the phone with the RCMP and … they don’t know an RCMP was on my road,” MacBurnie said. “We just got scared at that point.”

The gunman then drove through Wentworth and shot Lillian Campbell on Highway 4 as she was out walking. Campbell’s neighbour Reginald Jay had already seen the cruiser earlier that morning, before his wife, Mary-Ann Jay, heard the gunshot and saw the shooter drive off around 9:30 a.m. after killing Campbell.

Driving south on Highway 4 from Wentworth, the gunman evaded Cpl. Rodney Peterson of Colchester RCMP by pulling into the driveway of Adam and Carole Fishers’ home.

As he passed the gunman, Peterson saw him smile in a forced way, and only had a few seconds to decide what to do.

“I’m trying not to get myself killed here. In my head, he has a gun, he’s going to use it,” Peterson said. “Your heart goes in your throat.”

But by the time Peterson turned around and raced south on Highway 4, he’d lost sight of the gunman who had turned into the Fishers’ driveway.

Carole Fisher saw the gunman’s car pull up, and when he got out she recognized him right away. She told her husband, called 911 at 9:48 a.m. and ran to hide in the bathtub.

“I thought I was dying,” Carole later told police. “I just felt that help wasn’t coming. And I was so scared.”

But the gunman left just two minutes after he arrived, and headed back to Debert.

Besides Portapique, the most close calls with the gunman happened along Plains Road in Debert around 10 a.m. when he killed Beaton and O’Brien. At least 12 people saw the gunman, or missed him by seconds, including Dykens.

Leroy Crowe was driving east on Plains Road with his two children in the car when he noticed an RCMP cruiser in his rear-view mirror, but thought it was odd that it would have a black push bar on the front.

“My young fella tried to turn, and I was like, ‘Don’t stare at the police,'” Crowe said.

Terry Budd had just finished a 12-hour shift at the nearby hardware store when he heard popping sounds driving along Plains Road. He slowed down and saw the gunman shoot the windows of O’Brien’s car.

Budd said he then watched a tall man wearing a bright orange or yellow jacket get into an RCMP vehicle and start “booking it” away from him in the opposite direction.

“You know you’re trained to stop at a RCMP. He could have just put his arm out the window and I’d have stopped,” Budd said.

Although Dykens said the encounter with the gunman left him with a “funny feeling” when he saw police cruisers for the next few months, it hasn’t made him hesitant to stop for someone on the side of the road.

Dykens does echo concerns from victims’ families and the public about why Portapique wasn’t locked down more quickly, and whether people might have been saved on April 19 if RCMP had sent an emergency alert more widely, as opposed to relying on Twitter.

“They’re going to learn by this, that’s for sure,” Dykens said. “You can’t change what’s happened, but you can change what might happen in the future. So hopefully… it does make a difference.”

The inquiry resumes public hearings on Monday, when the commission is expected to present more documents about what happened at the Onslow fire hall, and the locations where the last three victims were killed on April 19 before the gunman was shot dead by police in Enfield, N.S.