Nerds of the Valley rejoice. A few popular geek-friendly events, including the annual ZapCon classic arcade and pinball game convention, will make their long-awaited return this month after a two-year absence. Mashing buttons and working the joysticks of vintage coin-ops aren’t the only thing to do in April, as you can also celebrate your love of bikes and beer at Tour de Fat, watch pro wrestlers and drag artists perform, or ponder the nature of the universe.

There are even more nerdy things to do this month beyond that, which you can learn about by checking out the following list we’ve assembled.

Every (puppet) dog has his day.

The elevator pitch for All Puppet Players’ latest production is pretty straightforward: Quentin Tarantino’s Reservoir Dogs, but the characters are not only all puppets, but they’re also canines. The revered 1992 indie flick, which involves a group of criminals planning a diamond heist only to have it go awry, will be satirized by the adult puppet theater troupe in humorously gonzo fashion, complete with foul language, bad puns, a killer soundtrack, and jokes pointing out all the plot holes. The show’s three-week run starts on Friday, April 8, at Playhouse on the Park at Central Arts Plaza, 1850 North Central Avenue, with performances held every Thursday through Sunday at 7:30 p.m. through April 30. General admission is $30 and VIP tickets are $57 and feature priority seating within the front two rows and deals on drinks. Cocktail table seating for two is also available and includes a complimentary bottle of wine and happy-hour prices. Attendance is limited to those 17 and older. Benjamin Leatherman If your favorite things in life include bikes or beer, you’ll want to hit Tour de Fat, a gathering of bicycle and beer enthusiasts happening from noon until 6 p.m. on Saturday, April 9, at Tempe Beach Park, 80 West Rio Salado Parkway. Costumes are encouraged, and you can show up early if you want to register at 11 a.m. for the noon bike parade. Activities at Tour de Fat will include live music by Duckwrth, Capyac, and Brothers of Brass. There will also be various other performances, as well as a mix of games, rides, and interactive art pieces around the park. As for the beer, that will be provided by New Belgium Brewing, the event’s promoter. Admission is free and costumes are very much encouraged. Lynn Trimble

Some of downtown Mesa’s many businesses.

Attention bookworms and word nerds of the Valley: If spending a weekend afternoon strolling through a historic downtown area while interacting with local authors and picking up some new finds sounds like time well spent, the Mesa Book Crawl is for you. The five-hour event on Saturday, April 9, in downtown Mesa will involve the aforementioned activities. Participants will check-in at the OneOhOne Gallery, 101 West Main Street, starting at 11 a.m. and receive a personal passport before hitting up a dozen nearby businesses. Authors will be available at stops, as will a variety of books for sale, and you’ll receive an entry into a prize raffle with each visit or purchase made. Complete details about the event can be found here.

If you’re a firm believer in facts – particularly those that are scientifically proven, clearly documented, or grounded in reality – the last several years and the nonstop assault on reason and knowledge have been quite tortuous. Renowned biologist, author, and science popularizer Richard Dawkins likely feels the same way, as he’s been fighting superstitions, half-truths, and outright lies with cold, hard facts for most of his adult life. He’s scheduled to appear at the Orpheum Theatre, 203 West Adams Street, on Sunday, April 10, along with theoretical physicist (and onetime Arizona State University professor) Lawrence Krauss.

The two will conduct a Q&A session and screen their 2013 documentary The Unbelievers, which follows the pair as they conducted lectures around the world promoting science and reason. The event starts at 7 p.m. and general admission is $40 to $80. VIP tickets, which offer premium seating and access to an autograph session and meet-and-greet with Dawkins and Krauss, are $250. Benjamin Leatherman

Probing the Mysteries of the Universe

If you’re discussing something as enormous and brain-bending as understanding the enormity of the cosmos, you’d definitely want some major eggheads involved. Such will be the case during the event “Probing the Mysteries of the Universe,” a panel discussion on Monday, April 11, at the Orpheum Theatre, 203 West Adams Street. Participants like Nobel Laureate and experimental physicist Barry Barrish and theoretical cosmologist Michael Turner, who coined the term “dark energy,” will discuss the challenges and recent technological advances involved with expanding our knowledge of the universe. Legendary astrophysicist and planetary scientist Neil DeGrasse Tyson will also participate via the Internet. The discussion begins at 7 p.m. Tickets are $40 to $80. A VIP package is $150 and offers such perks as premium seating and pre-event reception with the panelists. Benjamin Leatherman

The illuminated scene at a previous Fluor-Ascent.

Under normal circumstances, getting lit while going mountain climbing at night isn’t a wise idea, unless you’re participating in this outdoorsy event organized by the Arizona Cacophony Society. Members of the local urban prankster and social group will adorn themselves with colored lights and glowing objects as they scale Piestewa Peak on the evening of Saturday, April 16. According to the group’s website, one of the goals of the event is to “have a bunch of strangely lit things all over the mountain so people on [State Route 51] see us and are in awe at the splendid beauty.” If it sounds like fun, feel free to gather at the Piestewa Park Trailhead, 2701 East Squaw Peak Drive, starting at 6:30 p.m. The 1.2-mile excursion, which begins at 7 p.m. can be steep at times, so hiking or athletic shoes are recommended. It’s free to participate and more info is available here. Benjamin Leatherman Digging for treasures during a 2020 Record Store Day at The ‘In’ Groove.

Every year, vinyl collectors impatiently wait for the official Record Store Day list of releases to be posted so they can start crafting their plan of attack. But many know that heading out to the record shops with a grocery list is truly a fool’s errand. You never know what you’re going to walk out of the store with. Each of the 13 record stores across the Valley participating in this year’s Record Store Day on Saturday, April 23, prefers to celebrate the occasion in its own way. Most will carry releases from the official Record Store Day list, while others prefer to unload a large collection of records stockpiled just for the occasion. Some shops will even put together a day full of activities with live music, DJs, and record-signing events. A list of participating stores and other info can be found here. Julian Hernandez

Like the undead rising from the grave, longtime local repertory film series Cult Classics is returning after a lengthy absence. The geek-friendly event – which screens cult favorites and retro flicks of the sci-fi, fantasy, horror, and blockbuster variety – will stage its first edition in more than two years on Saturday, April 23, at the Landmark Scottsdale Quarter Theatre, 15257 North Scottsdale Road, Suite 230. Organizer Victor Moreno has picked a suitable film for the occasion: the zombie-filled 1985 horror/comedy The Return of the Living Dead. The screening starts at 9 p.m. and will include a variety of pre-show trailers and video clips before the feature. As is the norm for Cult Classics, commemorative t-shirts, posters, and art prints inspired by the movie will be for sale. General admission is $15 in advance, $16 at the door. Various VIP packages, which include the aforementioned t-shirts, prints, and other merch, start at $25 to $35. Visit the Facebook event page for full details. Benjamin Leatherman 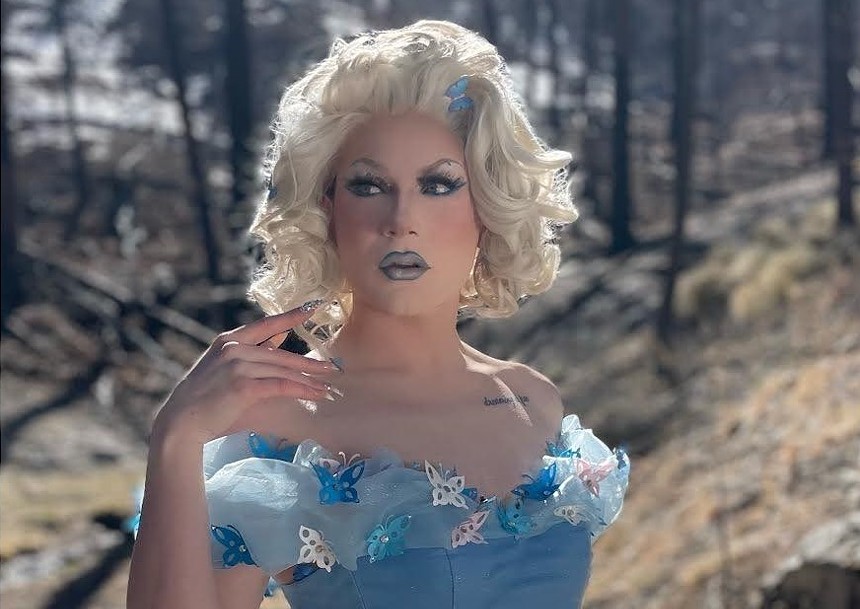 When it comes down to it, drag artistry and professional wrestling have more than a few things in common. Both involve a performance aspect and frequently star colorful, larger-than-life characters engaging in choreographed and frequently over-the-top antics. So an event like WrestleDrag, which will feature both performances by Valley drag queens and matches between local pro wrestlers, doesn’t seem like that unusual of an idea. The inaugural edition of the LGBTQ-friendly event will take place on Saturday, April 30, at 3104 West Thomas Road, Suite 1001. Six matches are scheduled, including Bodhi Young Prodigy battling Evan Daniels for the Arizona Wrestling Federation’s state championship and a tag-team contest between Morgan and Ricky Rayez versus Gin & Toxic. A half-dozen local drag artists will also perform, such as Beatrix Bella Rouge, Alexandra Armstrong, and Moxxi Strokes. Doors are at 6 p.m. and admission is $25. Proceeds will benefit the Phoenix Batatudes softball team. Benjamin Leatherman

Sorry geeks, you’ll have to settle for classic games at home now.

Like any frustrated gamer trying to beat the ultra-challenging Dragon’s Lair, the eighth edition of ZapCon took a few attempts to pull off. Delayed for two years because of COVID-19, organizers of the annual classic arcade and pinball game convention will finally press start on the event. Like its previous editions, this year’s ZapCon will transform the interior of the Mesa Convention Center, 263 North Center Street, into the Valley’s biggest old-school arcade from Saturday, April 30, to Sunday, May 1. Gamers can travel through a warp zone to the glory days of Pac-Man and Donkey Kong and get their hands on more than 200 vintage titles and coin-op classics. There will also be several pinball tournaments held throughout the weekend and a number of retro game consoles available for play. Doors open at 10 a.m. each day. Tickets are $35 for Saturday, $25 for Sunday, or $50 for the weekend. Children 3 to 12 will receive discount admission and kids under 3 are free. Benjamin Leatherman